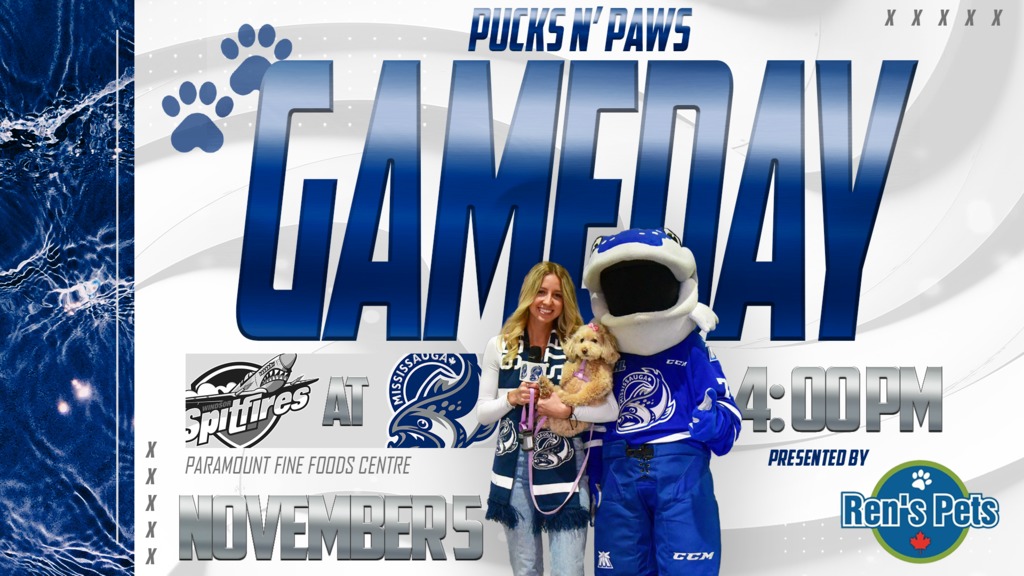 For the fifth time the Mississauga Steelheads are hosting a game where you can bring your dog!

MISSISSAUGA, ON – The Mississauga Steelheads will be welcoming all Steelheads fans and their dogs to the arena on one of the most anticipated and unique game days.

Mississauga’s team will be hosting their 5th annual Pucks N’ Paws game on Saturday November 5 at 4:00 PM, brought to you by Ren’s Pets. The upcoming game is the first of two Pucks N’ Paws games this season, with the Trout facing the Windsor Spitfires on November 5 and the Sudbury Wolves on Saturday February 11 at 4:00 PM. For both of these games, fans can bring their four-legged friends.

As part of the game day festivities on Saturday afternoon, Ren’s Pets will have a Fetch and Releash raffle where you will have the chance to win a prize basket with lots of Ren’s goodies. All the proceeds from the raffle will be donated to Fetch and Release, a local dog charity dedicated to saving dogs in need.

Fans and their pups can also enjoy a variety of vendors including doggy spas, rescues, humane societies, grooming and more. Steelheads fans bringing their good boys and girls to the game can fetch tickets in sections 11 through 16.

As part of our promotional games, the Family Four Pack will also be available which includes, four tickets, four drinks and four popcorn for just $85 including tax. With every ticket purchased, your dog will receive a complimentary ticket to the game. You can purchase your tickets to the November 5 Pucks N’ Paws game by clicking here.

The Steelheads want to see you and all your furry friends enjoying the game! Post a picture or video of you and your dog watching the match from your seats or enjoying the off-ice festivities and tag us on Instagram, Facebook, or Twitter @ohlsteelheads for the chance to see your face on the Steelheads accounts.