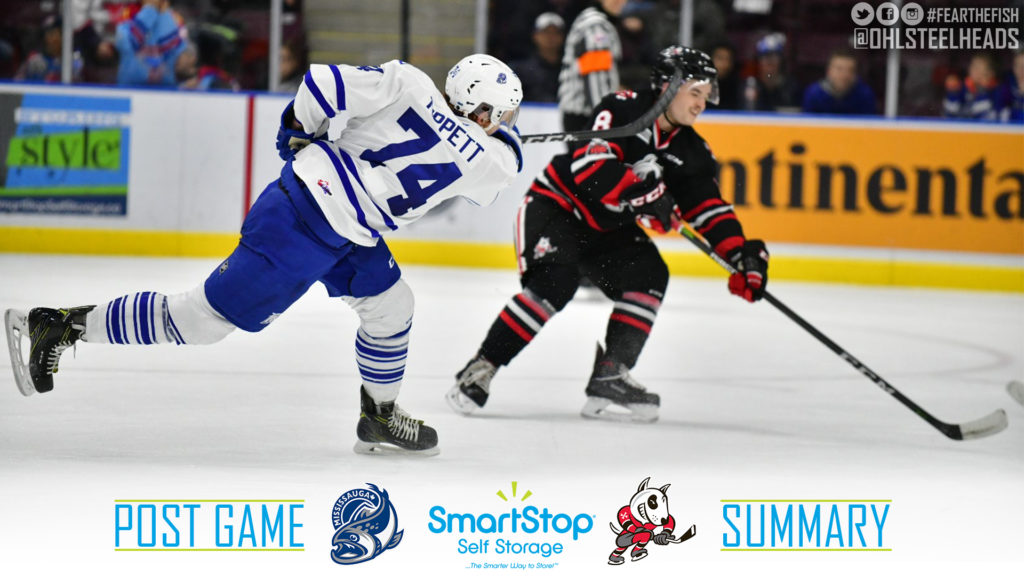 ­Coming off a 4-2 win over the Oshawa Generals on Friday, the Steelheads hosted their division rivals, the Niagara IceDogs Sunday afternoon. The Steelheads-IceDogs series is even 1-1 so far this season, with the Steelheads taking the most recent meeting by a score of 4-1. A win today would put the Steelheads (8-1-0-1 in their previous 10) above .500 and would leapfrog them into second place in the central division.

The majority of the opening period was an even back and forth game, with each side exchanging their fair share of opportunities. Approaching the halfway mark of the period, the Steelheads would see a 5-on-3 opportunity as Zach Shankar and Ben Jones received back-to-back tripping and delay of game penalties respectively. The IceDogs penalty kill unit went to work to kill off the pair of penalties, and the game returned to even strength with the Steelheads unable to capitalize on the man-advantage. Late in the frame, Owen Tippett broke the deadlock and put the Steelheads on the board. Michael McLeod and Jacob Moverare picked up the assists on Tippett’s third of the season. Mississauga outshot the IceDogs 13-9 in the first and held a 1-0 lead on the scoreboard heading into the first intermission.

The second period got off to a bit of a rough start as Niagara’s Adrian Carbonara was handed a five-minute major and game misconduct for a check to the head just 34 seconds in. The hit sparked a pile up in front of the benches, resulting in coincidental unsportsmanlike penalties to Zach Shankar and Nicolas Hague, and a roughing minor to Ryan McLeod. Shortly after the penalties were sorted, Michael McLeod tipped in a Thomas Harley shot from the point to extend the Steelheads’ lead 2-0. Owen Tippett picked up the secondary assist on McLeod’s second goal of the season and second in as many games. Both teams continued to be physical throughout the frame, exchanging a number of penalties. The IceDogs outshot the Steelheads 10-5 in the second while the Steelheads held a 2-0 lead on the scoreboard heading into the final frame.

The physicality carried over into the final frame, keeping the refs busy as the penalty minutes started to rack up. Nic Hague capitalized on an early power play opportunity to give the Steelheads a three-goal cushion. Tippett assisted on Hague’s 10th of the season. A minute later, Kirill Maksimov capitalized on a two-man advantage to get the IceDogs on the board and cut Mississauga’s lead 3-1. Full strength action was rare in the final frame as tempers continued to flare and 14 penalties were called (8 for the Steelheads, 7 for the IceDogs). Colton Inze was pulled from the IceDogs’ net late in the frame to make way for an extra attacker as the visitors tried to claw their way back. The Steelheads had two close chances on the empty net, but were unable to score before time ran out. The final score was 3-1 as Steelheads picked up two points and improved to 11-10-0-1.

The Steelheads will have a few days rest before returning to action on Friday when they host the Sarnia Sting for a 7PM start.