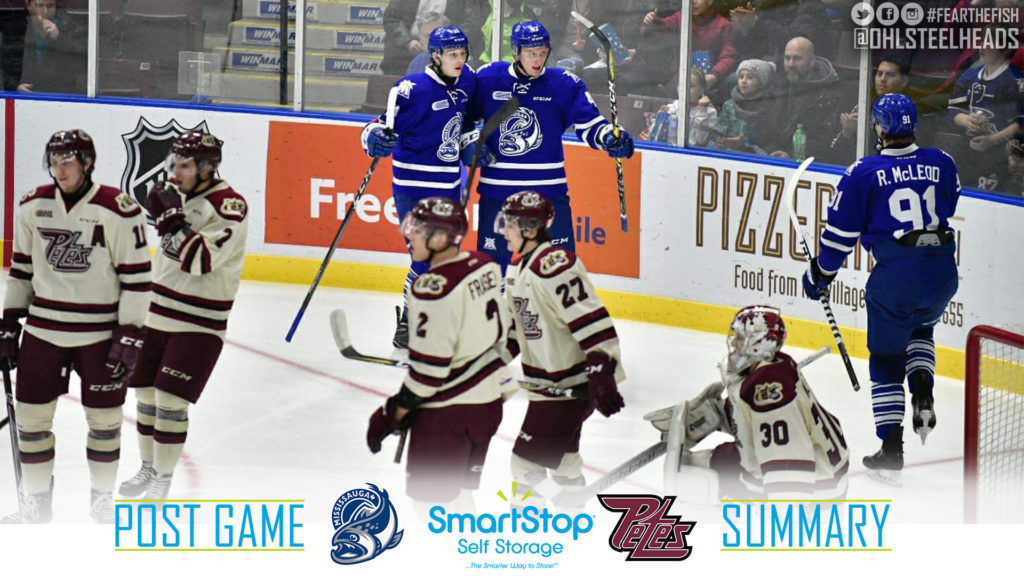 Friday night’s home game against the Peterborough Petes got off to a slow start. The Steelheads were looking to extend their two-game win streak and the Petes were looking for more than a single point. Trent Fox opened the shots on goal for the Steelheads, who held that lead through the 20 minutes. The Petes took the lead with 13:49 left to play thanks to centreman Pavel Gogolev who picked up his 18th of the season. He would later give Mississauga the first power play of the game when the Petes were caught with too many men on the ice. Defenceman Nicolas Hague welcomed the advantage and tied the game with just under a minute left in the first. His 24th goal was assisted by Owen Tippett and Mathieu Foget.

The Steelheads started the second period with a goal from left-winger Trent Fox, his 15th of the season. The fish were unable to maintain their lead and the game was tied by Gleb Babintsev’s first of the season halfway through the frame. The goal was followed closely by Christopher Paquette and the Petes made it 3-2. Mississauga’s Ryan McLeod was sent to the box for high-sticking late in the period and Peterborough’s Zach Gallant sat seconds later for hooking/tripping. The fish had just under 90 seconds to take advantage of a power play but failed to do so. They were behind in the score but dominated shots on goal 27-20.

The Steelheads increased their shots on goal in the third but fell short of scoring. Alex Black of the Petes was sent to the box for inference with 6:34 left to go in the period. Ryan McLeod scored with two seconds left in the power play to tie the game and neither team could take the lead by the end of 60 minutes. Zach Gallant got one past Vella just over two minutes into the 3 on 3 action and the Steelheads left the ice as the Petes celebrated a victory. Moments later, the referees ruled the goal offside and the teams returned to their benches. Fired up, Ryan McLeod scored the overtime winner less than 20 seconds after play resumed.

The Steelheads now have a three-game win streak and are currently sitting eighth in the Eastern Conference. The Sudbury Wolves will visit the Hershey Centre Sunday January 28 for the Pink at the Rink game. Puck drops at 2 p.m.