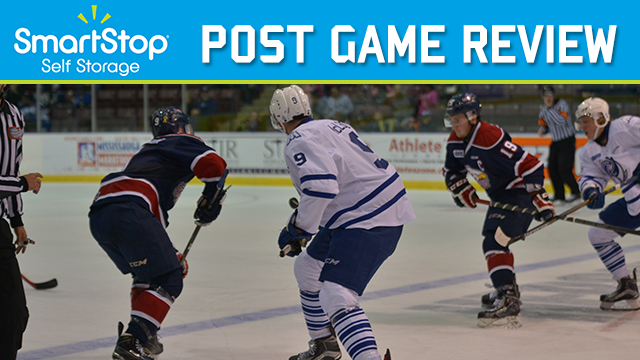 Following a hardly fought battle that ended in a shootout loss on Friday, the Steelheads looked to get back in the win column when they hosted the Saginaw Spirit Sunday afternoon. Tonight marked the second meeting between these two teams, the first took place back October 15th where the Steelheads edged the Spirit 3-2 in overtime. Today’s game would see a similar end result, although this time the Steelheads held the Spirit off in regulation for a 3-2 victory.

Steelheads Captain, Michael McLeod would get things going for the home team late in the opening frame, capitalizing on a power play to get Mississauga on the board. Spencer Watson and Owen Tippett assisted on McLeod’s 16th of the season as the Steelheads held a 1-0 lead after 20 minutes of play.

Trent Fox added to the Steelheads lead at the mid way point of the middle frame, scoring his 10th of the season from Spencer Watson and M. McLeod to give the Steelheads a two-goal lead. Minutes later, the Spirit were able to solve Matthew Mancina and cut the Steelheads’ lead in half as Brady Gilmour scored his 22nd of the season, unassisted to make it a 2-1 game. Late in the frame, Aidan McFarland set up Matthew Titus perfectly in front of Saginaw’s goal where he made no mistake netting his first career OHL goal and eventual game winner. Stefan LeBlanc picked up the secondary assist on Titus’ goal as Mississauga held a 3-1 lead heading into the final frame.

Although the final frame got off to a slow start, the Spirit pulled within one to keep the Steelheads on their toes as Kris Bennett scored Saginaw’s second of the game, and his 18th of the season, to bring the score to 3-2. With just over a minute to play, the Spirit pulled Cormier from the net in favour of an extra attacker as they looked to even the score and force this game into overtime. Unfortunately for the visitors, the home team held on and picked up the 3-2 win at home.

The Steelheads are back in action on Wednesday to host the Kingston Frontenacs for their school day game at 11AM.