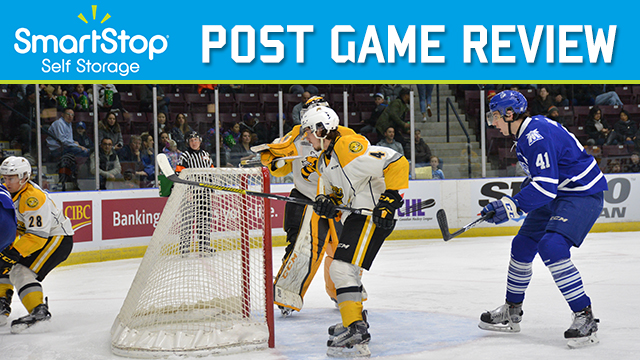 After coming off victories last night, both the Mississauga Steelheads and the Sarnia Sting came into today’s game looking to stay in the win column. Following last night’s win the Steelheads secured the title of central division champions, and hoped to ride that success today and extend their win streak to six in a row.

During the first period, Jaden Lindo and the Sting scored less than a minute in to give Sarnia the early lead. It was not long after, Owen Tippett, in only his second game after coming back from injury, scored for the Steelheads to tie up the game at 1-1. The Steelheads’ (Mancina) and Sting (Hughes) goalies were both able to make big saves to keep the game tied going into the second period.

Both teams came out for the second period playing hard hitting hockey. They were creating great scoring chances, throwing big hits and making great saves. The Steelheads took a total of 4 penalties in the second period, including a five-minute match penalty for slew footing taken by Austin Osmanski. Jacob Cascagnette scored on the only power play opportunity for the Trout had in the second, giving the Steelheads a 2-1 lead. Later in the period, Sarnia’s Drake Rymsha scored on one of the aforementioned power play chances, tying the game 2-2 after 40 minutes.

After an intense second period, both teams came out wanting to slow down and dictate the play. The Trout and the Sting took turns doing so, but neither were able to capitalize. The Steelheads took another three penalties in the third and also had to kill off a five on three. No goals were scored in the third frame, so with the game tied at 2, things were headed into overtime.

Fans were on the edge of their seats the entire overtime period. The Steelheads gave up two breakaways, but Matthew Mancina made big save and shut the door on the Sting. In the dying seconds of the overtime period, Nic Hague tucked in the game winner on Hughes with 0.7 seconds left to give the Steelheads the victory!

The Steelheads look to continue their win streak when they hit the road for a three-game road trip, starting in Barrie on Thursday March 9th. Puck drops at 7:30pm from the Barrie Molson Centre.