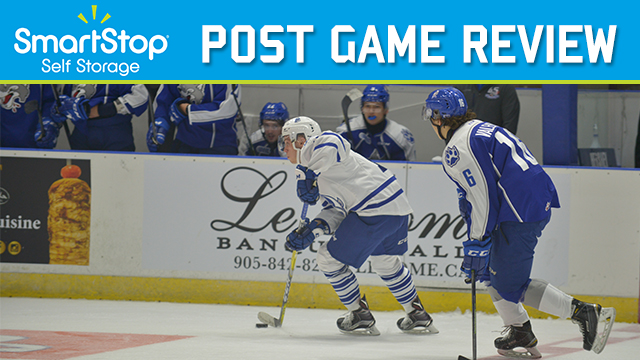 Riding the high of a 10-1 blow out win over the Peterborough Petes, the Mississauga Steelheads visited the Sudbury Wolves Saturday for a central division matchup. Prior to tonight’s game, the season series between the Steelheads and Wolves was even at 2-2, the Steelheads winning the most recent contest by a score of 3-1. The Steelheads continued firing on all cylinders tonight and picked up another two points, defeating the Wolves 6-2.

The visiting team wasted no time getting things going with goals from Stefan LeBlanc at 1:10 and Jacob Cascagnette at 3:32 to jump out to an early 2-0 lead. The Wolves were quick to shake those off as Macauley Carson responded with a goal at 5:32 to get his team on the board and cut the Steelheads’ lead in half. Past the midway mark of the frame, the Wolves were able to even the score as Darian Pilon potted his ninth of the season from brother Drake and Shane Bulitka at 11:28. At 13:59, Sudbury’s Michael Pezzetta would head to the box for a check from behind, opening the door for Mississauga to restore their lead. Nicolas Hague was up for the task as he netted his 16th of the season from LeBlanc and Spencer Watson to give the Trout a 3-2 lead heading into the first intermission.

Mississauga dominated the middle frame adding three more goals en route to their 6-2 victory. The first came from captain Michael McLeod, who has been having quite the weekend after a six-point effort last night. The goal was a shorthanded one and McLeod’s 20th of the season. Less than a minute later, Stefan LeBlanc set up McLeod who would strike again to extend Mississauga’s lead 5-2. At 9:00, Cascagnette added to the Steelheads’ lead with his second of the night. Michael McLeod and Stefan LeBlanc both assisted on the final tally, finishing off the night with three points (two goals, one assist) and four points (one goal, three assists) respectively.

Having outscored their opponents 16-3 in the past two days, the stage is set as the Steelheads return to the Hershey Centre tomorrow for part two of their home-and-home with the Wolves. Tomorrow’s game will be broadcast live on Sportsnet 360.