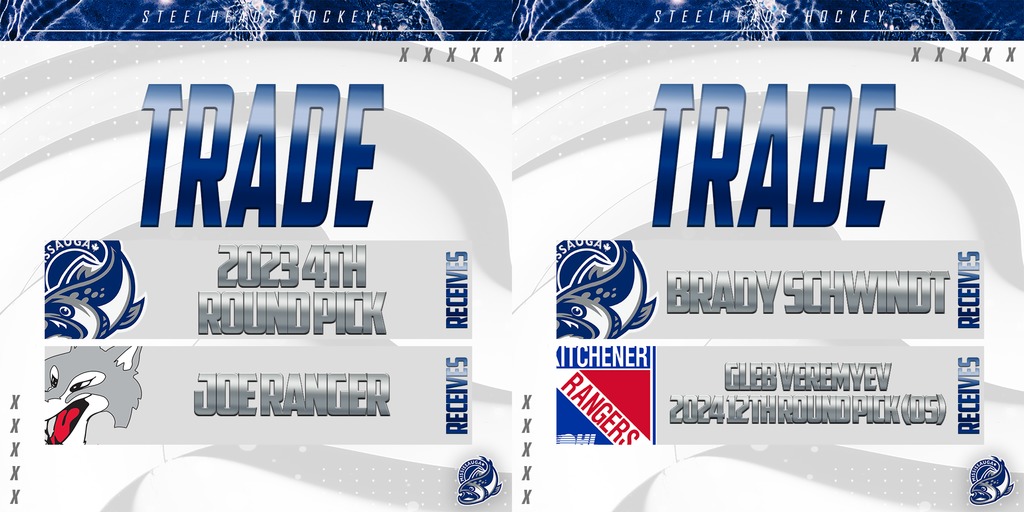 MISSISSAUGA, ON – The Mississauga Steelheads announced Thursday that they have completed two trades.

In the first trade, the Steelheads sent veteran goaltender Joe Ranger to the Sudbury Wolves in exchange for a fourth-round pick in 2023.

Ranger played for the Steelheads from 2018-2022. The Carp, ON native was drafted by the team in the fourth round (63rd overall) of the 2018 OHL Priority Selection. Over three seasons, the goaltender played 55 games and earned 22 wins.

The goalie had a breakout year this past season, recording a 2.54 goals against average and 0.911 save percentage over 29 games played. He ranked second among OHL goalies in regular season shutouts (4) and was named OHL Goaltender of the Week on January 3.

In a second trade, the Steelheads confirmed a deal that sends prospect Gleb Veremyev and a 2024 12th-round pick (Owen Sound) to the Kitchener Rangers in exchange for Brady Schwindt.

A Kitchener native, Schwindt was selected by the Kitchener Rangers in the 8th round (142nd overall) of the 2021 OHL Priority Selection. Brady joins his brothers Kai and Cole, becoming the third Schwindt brother to be a part of the Steelheads roster. The centreman scored 17 points (7G, 10A) in 31 games with the U18 Waterloo Wolves in the 2021-22 season.

We thank Joe Ranger for all he has done with the Mississauga Steelheads this season and wish him the best of luck with the Sudbury Wolves! We are also excited to welcome Brady Schwindt and we look forward to continue to have his family as part of our organization.