Steelheads unable to hold off Greyhounds 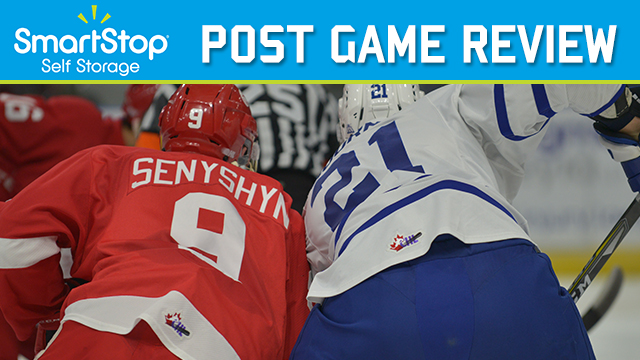 After having a week off, the Mississauga Steelheads returned to action Friday night to host the Sault Ste. Marie Greyhounds at the Hershey Centre. The building was buzzing as the Steelheads looked to snap a four-game losing streak. The powerhouse Greyhounds came into tonight’s game riding the high of a five-game winning streak, including a 6-1 victory in North Bay Thursday night. Although the Steelheads lead through two periods of play, the Greyhounds would ultimately prove once again why they’re the top road team in the league after improving to 12-2-0-0 on the road following tonight’s 5-3 win over the Trout.

The opening frame was a back and forth affair as both sides exchanged a number of opportunities. The game would stay scoreless after the first 20 minutes, with Mississauga holding a slight edge in shots on goal, 13-12.

Brendan Harrogate opened the scoring at 3:15 of the second to give Mississauga a 1-0 lead. Michael McLeod and Owen Tippett had the assists on Harrogate’s 7th of the season. Just over a minute later, Steelheads’ leading goal scorer, Owen Tippett would extend Mississauga’s lead 2-0 with his 17th of the season. Greyhounds’ Zachary Senyshyn would strike at 7:07 of the second to cut Mississauga’s lead in half. The goal was the Boston Bruins’ prospect’s ninth of the season, and was assisted by Morgan Frost and Mac Hollowell. At 14:43, Harrogate would restore the Steelheads’ two-goal lead with his second of the game from Stefan LeBlanc, giving Mississauga a 3-1 lead heading into the second intermission.

55 seconds into the final frame, the Greyhounds would capitalize on a powerplay to cut the deficit 3-2. The powerplay goal came from Morgan Frost, his 10th of the season unassisted. Just past the midway point of the period, the Soo would even things up as would as Liam Hawel scored his third of the season from Jack Kopacka and Conor Timmins. Just over a minute later, the Greyhounds took their first lead of the night as former Steelheads forward, Bobby MacIntyre netted his 13th of the season on the powerplay. The eventual game winner was assisted by Senyshyn and Frost. The Greyhounds sealed the win with an empty net goal from Boris Katchouk for a final score of 5-3.

The Steelheads return to action tomorrow with a visit to Owen Sound to take on the Attack at 7:30PM.