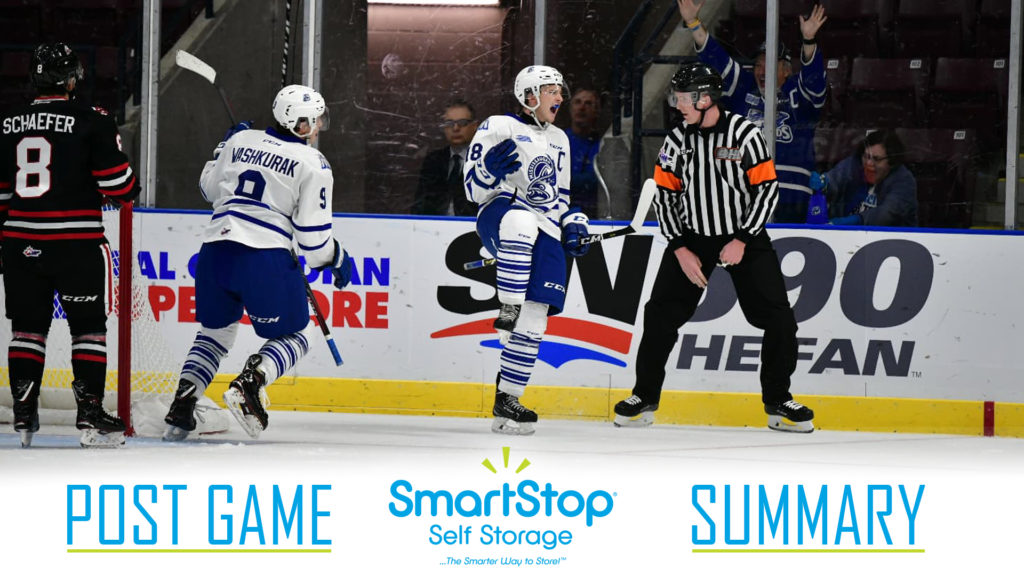 Looking for their fourth straight win, the Steelheads were back at home tonight for the second night of a back-to-back after a big 2-1 win against the Barrie Colts. The Steelheads faced off against the Niagara IceDogs, looking for revenge after losing 8-6 to their central division rivals in their home opener. With another big game from Thomas Harley, and a couple of goals from Cole Carter, the Steelheads did just that.

The first period was a wild one as we saw seven goals scored in the frame, as both teams went back and forth and showed off their firepower. Niagara started the game with two quick goals from Matthew Philip and Kyen Sopa, and put the Steelheads down 2-0 early on. Not to be outdone, the Steelheads responded with three quick goals of their own. Ryan McLeod scored his first goal of the season, followed by a Cole Carter power play goal and his fifth goal of the season. Not long after, Cole Schwindt put the Steelheads up 3-2 with a short-handed goal, his second of the season. Niagara responded again with a snipe from Kirill Maksimov, tying the game up at 3 a piece. It didn’t take long for a response from the Steelheads as Thomas Harley scored his first goal of the season with a minute to go in the first. The Steelhead had a 4-3 lead heading into the second period.

Compared to the first period which saw seven goals, the second period was a huge change of pace. Neither team was able to find the back of net. Each team had their opportunities on the power play, Niagara with a 5 on 3 chance with just over three minutes to play in the period, but both goalies stood strong. With Niagara pulling starting goalie Colton Incze in between periods and putting in Stephen Dhillon, it seemed that Niagara found their stability in net. It appeared at the same time, Dhillon’s netminder counterpart, Jacob Ingham, found his game in the second period, keeping the Steelheads in the game. After a scoreless stanza, the Steelheads headed into the third period with a 4-3 lead.

The third period finally saw an end to the scoring problem, but unfortunately it was for the visiting IceDogs, as Kirill Maskimov scored his second goal of the game, tying the score out a 4 a piece. Heading into the last minutes of the period, Dhillon and the IceDogs killed off a 5 on 3 power play to send the game to overtime. Dhillon did all he could, but the Steelheads found a way to beat the hot goalie, and Cole Carter scored his second goal of the game to win it in overtime.

The Steelheads improve to 4-1-1-0 on the season with their fourth straight win.  The Steelheads are back in action on Friday, October 12th, when they face the Hamilton Bulldogs back at home at the Paramount Fine Foods Centre. Tickets can be purchased on Ticketmaster here.