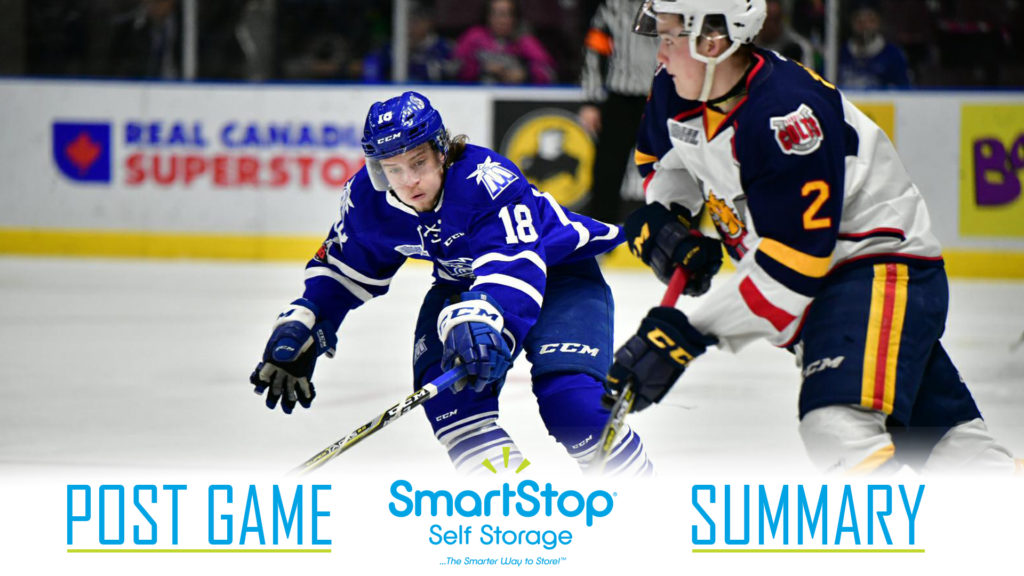 Coming off back-to-back wins last weekend, the Mississauga Steelheads travelled to Barrie Thursday night for the first of six matchups against their central division rivals. Although both teams sit 2-1-1-0, the Colts had a bit of an offensive edge heading into tonight’s game, scoring 23 goals in four games compared to 19 for Mississauga.

The Steelheads came out hungry in the first seconds, notching the opening goal just 14 seconds in as Cole Carter put his fourth of the season past Colts’ goaltender, Jet Greaves to give the Steelheads an early 1-0 lead. James Hardie and Ryan McLeod picked up the assists on the opening goal. Minutes later, Cole Carter fed a beautiful pass through the Colts’ crease right on the tape of Hardie’s stick who tapped in his third of the season to give Mississauga a 2-0 lead. McLeod picked up the extra helper on the goal. Approaching the halfway mark of the period the Colts capitalized on a power play opportunity as Matej Pekar scored his fourth of the season to cut the Steelheads lead 2-1.

The second period saw a lot of back and forth action with each goalie being tested. The Steelheads managed 14 shots and saw four power play opportunities in the frame, but were unable to capitalize as the score stayed locked at 2-1 heading into the final frame.

Jacob Ingham came out strong in the third making some key saves to keep the Colts from evening the score. The Colts pulled their goalie late in the frame in favour of an extra attacker, but the Steelheads were able to hang on for a 2-1 victory and their third straight win.

The Steelheads are back in action tomorrow for another central division matchup as they host the Niagara IceDogs for a 7PM start at the Paramount Fine Foods Centre. Tickets are available here.