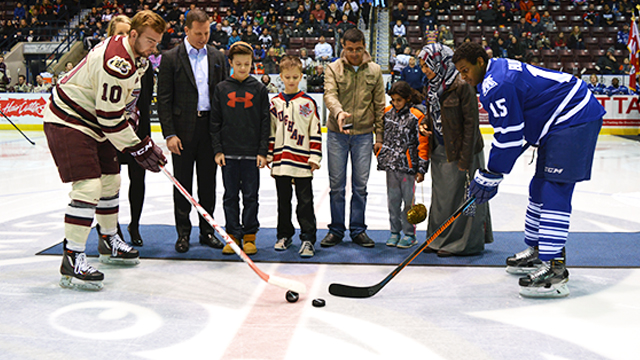 Many Syrian refugees got a good taste of Canadian culture Friday night when they were treated to a live Mississauga Steelheads game.

Through a partnership with Lifeline Syria, the Steelheads offered more than 500 tickets to the organization to distribute to Syrian families and members of various sponsorship and support groups.

“The Steelheads have been amazing and have reached out to so many sponsor groups like ours,” said Iffat Rahman, a volunteer with Arrahman Compassionate Group.

“They wanted to do something very nice to welcome the families and new members to the community in a Canadian way. There couldn’t have been a better way for them to do this.”

The guests were on hand to watch the Steelheads defeat the Peterborough Petes 5-3 at the Hershey Centre in Ontario Hockey League action.

For most of them, it was their first time seeing a live hockey game, although some of them, such as Husen Ilmhen, have watched games on TV.

Several media outlets, such as City TV, CBC and Global News, were at the Hershey Centre to document the Syrians reaction to hockey.

The federal government has brought more than 25,000 Syrian refugees to Canada since the fall and Ilmhen said he and his family have settled in nicely since they came here more than two months ago.

“(Syrian Activist Voluneers executive director) Sam Jisri and SAV have done a lot of work for us,” he said. “We would have been lost without them.”