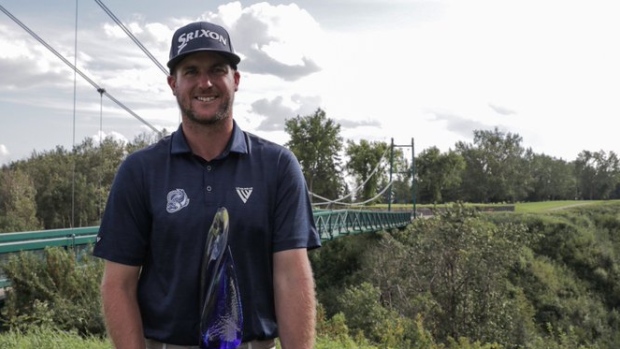 EDMONTON, ALB – Mississauga Steelheads ambassador Taylor Pendrith has been on quite a run as of late. After a runner-up finish at the Osprey Valley Open, and a T-3 showing at the HFX Pro-Am, Pendrith set the Edmonton Country Club course record on Sunday with a 62, to capture his first career Mackenzie Tour win at the 1932Bateman Open.

An excited Pendrith spoke about his victory. “I don’t know if it’s sunk in yet, but it feels really good and I’ve been so close many times. To know that I’m a winner on this Tour brings me a lot of confidence. It’s hard to win on any Tour, so it feels awesome to be the champion here.”

The Richmond Hill, Ontario native found himself four shots back after rounds of (69-67-69) but came out firing on Sunday. After dropping seven birdies through 16 holes without a blemish on the card, the 28-year old stepped up to the par 5 17th and smashed his drive 390 yards leaving him with only a gap wedge to a tight pin. From 165 yards out, Pendrith stuck his approach to 10 feet and would go on to convert the eagle putt.

“I knew that putt was going to be big,” Pendrith said. “I didn’t really know where I was standing but I knew that if I made that I was going to get to nine-under on the round and that was probably going to have a chance to win. That was definitely the big hole for me to make a three there and pick up two shots.”

After an effortless par on the closing hole, Pendrith headed to the driving range to prepare himself for a playoff scenario but the extra practice would not be needed. The Golf Canada Young Pro Squad member would go on to win by three and move up to No. 4 on the domestic circuit’s Order of Merit. With the victory, Pendrith also became the first Canadian to win a Mackenzie Tour event since Adam Cornelson won the 2016 Bayview Place DCBankOpen.

On the Mackenzie Tour it is important to remain in the top-five in the Order of Merit by seasons end. The reward is a promotion to the Korn Ferry Tour (previously known as the web.com Tour), where the Top 50 players receive their PGA Tour card. The young Canadian accomplished the feat of reaching the Korn Ferry Tour in 2015 and is confident that he can do again.

Pendrith commented on the importance of the remaining schedule. “I know most of the golf courses out here, I feel comfortable out here and now I’m playing some really good golf. The end of the year, the last few tournaments will be pretty crucial. Knowing I have the ability to finish in the top five and just coming off a win I have tons of confidence, so I’m really looking forward to keeping it going over the next few events.”

The big hitting Canuck has strong reason to be confident heading into his next couple events and not just because of his recent podium finishes. Pendrith’s game has been extremely consistent, posting a round in the 60’s sixteen straight times for a combined 75 under par over that span.

Pendrith’s next event will be the ATB Financial Classic at Country Hills GC Talons Course in Calgary, Alberta.