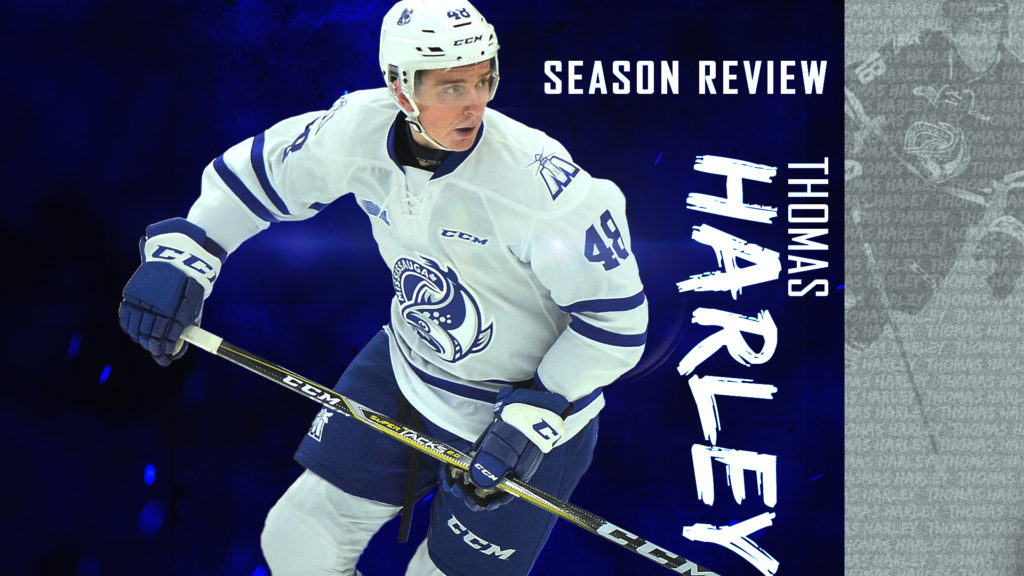 Selected to the OHL vs. Russia Series

On October 17th, 2018 it was announced that three Steelheads would be playing in the 2018 CIBC Canada Russia Series, including defenceman Thomas Harley. There were only ten defencemen chosen out of the 31 players selected to represent the Ontario Hockey League. The series consisted of six games with each of the three leagues from the CHL, playing two games against Russia. The Syracuse, New York native played in Game 4 against the Russian squad alongside his fellow teammates at the time, Owen Tippet and Ryan McLeod.

Voted MVP of the Mississauga Steelheads

On March 20th, 2019 at the annual team banquet, Harley was awarded MVP of the Steelheads for the 2018-19 season. With the departure of one of the league’s best defenceman in Nic Hague, Harley stepped into a lead role on the blue line. After his first season earning 15 points (1 goal, 14 assists) in 62 games, the sophomore’s offensive output drastically improved finishing third on the team with 58 points (11 goals, 47 assists) in 68 games. Harley also finished 8th among all defenceman in the OHL for overall points and 4th among defencemen in total assists. Most recently, Harley was also named a Third-Team All-Star by the Ontario Hockey League.

On April 5th Team Canada announced its training camp roster for the 2019 IIHF U-18 World Championships. Among the few selected was Thomas Harley. Harley, a highly-touted 2019 NHL Draft eligible prospect came off an impressive sophomore season in the OHL with the Steelheads, recording 58 points in 68 regular season games. He followed up that performance with a solid display in the playoffs registering four assists in four games against the Sudbury Wolves.

Harley’s play has attracted the praise of multiple scouting sources this past season. NHL Central Scouting put Harley 9th amongst North American Skaters in their Midterm rankings which was the highest ranking awarded to an OHL prospect. TSN’s Craig Button listed Harley 16th in his most recent rankings and Sam Cosentino of Sportsnet put Harley in the top 10 in a list of combined North American and European prospects.

The Steelheads defenceman wasn’t new to wearing a Team Canada jersey, having suited up with Team Canada Black at the 2017 Under-17 World Hockey Challenge. Harley’s free-wheeling and smooth skating style translated well onto the large ice surface in Ornskoldsvik and Umea, Sweden. He registered 5 points (1 goal, 4 assists) over 7 games finishing tied for 7th in scoring amongst Team Canada skaters for the tournament.

On May 7th, 2019 the Ontario Hockey League announced the 2018-19 recipient of the Bobby Smith Trophy awarded to the OHL’s Scholastic Player of the Year, Thomas Harley.

Harley earned the honour for his academic achievements in the classroom combined with his on-ice excellence for the Mississauga Steelheads. Harley was enrolled in six University level courses at Philip Pocock Public High School and Blyth Academy where he carried an overall average of over 88% studying Advanced Functions, Interdisciplinary Studies, Biology, English, Geography, and Chemistry.

“It’s a huge honour to win this award,” said Harley. “A lot of great players have won it and I consider myself lucky to be among them. A huge thank you goes out to my parents, teachers, billets, and coaches who have gotten me to this point.”

The 17-year-old from Syracuse, New York, finished 8th among OHL defenceman in scoring and is currently the 11th ranked skater by NHL Central Scouting among North American prospects for the 2019 NHL Draft.  The first-round pick by the Steelheads in the 2017 OHL Priority Selection increased his point production by 43 from his rookie campaign and was voted Most Improved Player in the Eastern Conference Coaches Poll to go along with Best Offensive Defenceman and Second Best Skater recognition. At season’s end, Harley represented Canada at the 2019 IIHF World Under-18 Championship.

“The Mississauga Steelheads organization would like to congratulate Thomas Harley for being named this year’s Bobby Smith Trophy recipient,” said Steelheads General Manager and Head Coach James Richmond. “We couldn’t be more proud of Thomas for what he has accomplished not only on the ice but in the classroom as well. His dedication and commitment to his studies is a ringing endorsement that people can be great student athletes! Well done Thomas and we wish you continued success!”