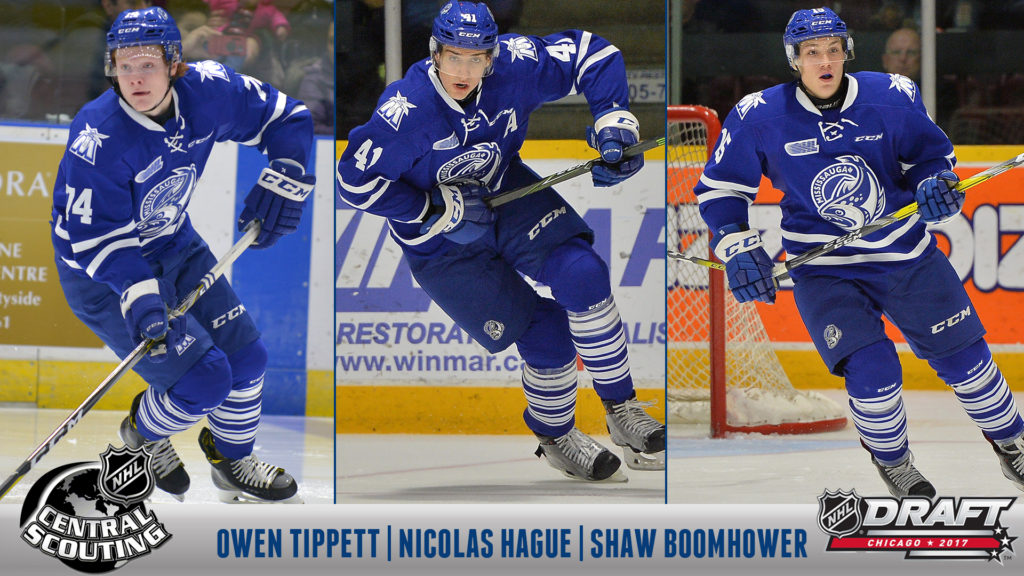 NHL Central Scouting has released their final rankings of top prospects for the 2017 NHL Entry Draft. Nolan Patrick of the Brandon Wheat Kings (WHL) remains atop the list that was released Tuesday. He was also first in the mid-term rankings.

Among the North American Skaters are three Steelheads; Owen Tippett (7th), Nicolas Hague (20th) and Shaw Boomhower (112th). Owen Tippett closed out the 2016-17 regular season leading the Steelheads in points (75), tying the franchise leader, Alex Nylander for most points in a single season. He also led the team in goals and set a new franchise record for most goals scored in a single season with 44. Tippett’s rank dropped slightly from Central Scouting’s midterm rankings from fourth to seventh.

Nicolas Hague also had a career year, leading all Steelheads’ defencemen with 46 points (18 goals, 28 assists). The Kitchener, Ontario native recorded his first career hat trick this season against the Guelph Storm on October 12. Hague is a big defenceman who moves the puck very well to create offensive chances. His size and excellent shot make him a threat every time he steps on the ice. Hague’s rank also dropped slightly from 11th at the midterm rankings to 20th at the final rankings.

Shaw Boomhower has been a solid force on the Steelheads’ roster this season. He plays a physical game and brings energy and grit to every shift. Boomhower scored his first career OHL goal in his second game on September 30th against the Windsor Spitfires. He closed out the 2016-17 regular season with 17 points (seven goals, 10 assists). Since the midterm rankings, Boomhower has climbed from 123rd to 112th at the final rankings.