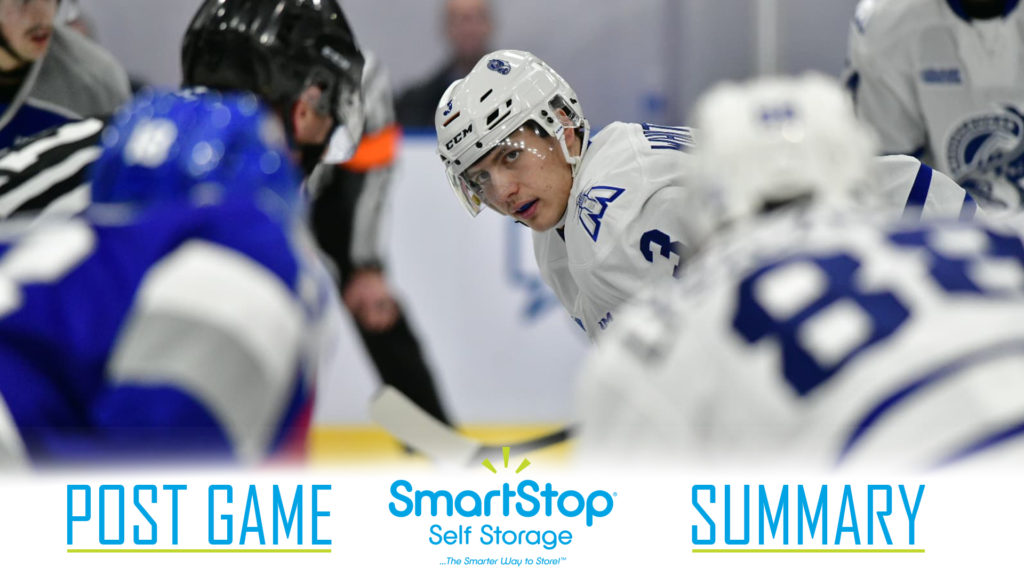 In a battle for the number one spot in the central division, the 13-6-2-0 Mississauga Steelheads took on the 13-6-1-1 Sudbury Wolves in this Sunday afternoon’s matchup. With the two teams tied for the number one spot in the division, the Steelheads’ high-flying offence was up against one of the better defensive teams in the league. Thanks to the Steelheads’ top two lines, they now hold sole possession of first place in the central division with a big 5-3 win over the visiting Wolves.

The game started out with a bang as both teams had a scoring chance in the first minute, but the Steelheads were the first ones to capitalize on the early game rust. Ryan McLeod sniped his fourth goal of the season just 1:02 into the game to give Mississauga the 1-0 lead. The Steelheads kept the pressure in the Wolves’ end for most of the period but their attempts were thwarted by Sudbury’s star goalie, Ukko-Pekka Luukkonen, with a little help from his posts. The Wolves were able to tie the game up with less than two minutes to go in the frame on a goal from Owen Gilhula. The score stayed locked at 1-1 heading into the second period.

Coming into the period with 12 shots apiece, the Steelheads were able to tilt the ice in their favour in the second frame. Holding the Wolves to only seven shots in the period, the Steelheads had 13 shots of their own including two goals. Nicholas Canade opened the scoring in the second period on a Steelheads power play. On a deflected shot from a Richard Whittaker pass, Canade was able to get a stick on the floating puck and beat the Wolves netminder. Just over a minute later on another power play, Ryan McLeod scored his second goal of the game, showing off his patience at the side of the net, then roofing it on Sudbury goalie Luukkonen, making it 3-1 heading into the third period.

It looked like it was going to be an easy third period for the Steelheads, as Owen Tippett scored his 15th goal of the season after taking advantage of an early power play opportunity. At the halfway mark of the third, things got heated as Isaac Walker and Drake Pilon dropped the gloves in a heavy tilt. That fight seemed to have sparked the Wolves as two unanswered Sudbury goals followed the fight. Liam Ross and Shane Bulitka each scoring a goal brought the Wolves within one, but the Steelheads were able to hold the fort down and end Sudbury’s momentum with an empty net goal from Tippett. His second of the game and 16th of the season sealed the win, 5-3 Steelheads.

The Steelheads top two lines carried them to their victory, as all five goals came from the top six. Cole Carter finished the game with three assists, Ryan McLeod with two goals, and Owen Tippett with two goals and two assists. Aside from the Steelheads Big Three, Nicholas Canade and Richard Whittaker helped out with a goal and three assists between them. The Steelheads are in London on Thursday to take on the Knights, then back at home on Friday when they take on the North Bay Battalion.