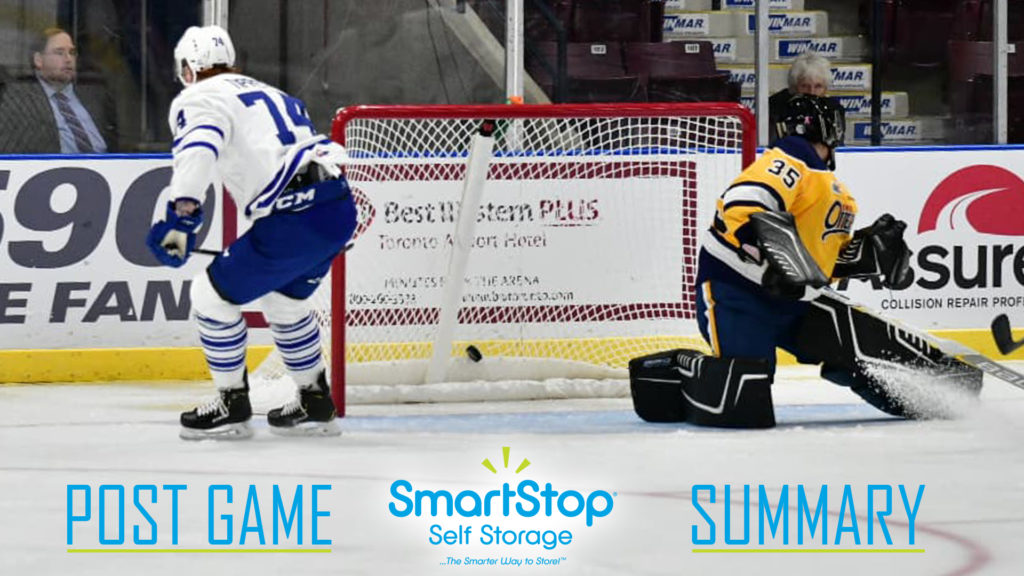 In his first game back, Owen Tippett opened the scoring with a shorthanded goal to put the Steelheads up 1-0 halfway through the first. With just over 3 minutes to play in the period, James Hardie put a floater past Battaglia to keep the pressure on heading into the 2nd stanza. Steelheads up 2-0 to end the frame.

The Steelheads came out flying in the 2nd period led by Owen Tippett. With just over 10 minutes to go in the period, the Panthers’ prospect potted his 2nd goal of the game and 2nd of the season. Not even 30 seconds later, Tippett scored again to complete the hat trick and give the Steelheads a 4-0 lead heading into the 2nd intermission.

Just like the second period, the Steelheads came out hot in the final frame, scoring 2 goals in the first five minutes of the period. Mississauga-native William Portokalis scored his first OHL goal, putting the Steelheads up 5-0. Just two minutes later, Cole Carter popped in his 2nd goal of the season to make it 6-0 Steelheads.

Ingham’s shutout bid was stymied when Kyle Maksimovich scored his 4th goal of the season with just over 10 minutes to play, but it was too late as the Steelheads get their first win of the season, beating the Erie Otters 6-1. Tippett was the main attraction scoring a hat trick in his first game back, but not be overlooked was Ryan Wells who quietly had a 3 assist night.

The Steelheads are back at home on Sunday, September 30th where they face off against the Kingston Frontenacs at 2:00pm. Tickets can be purchased online through Ticketmaster here.