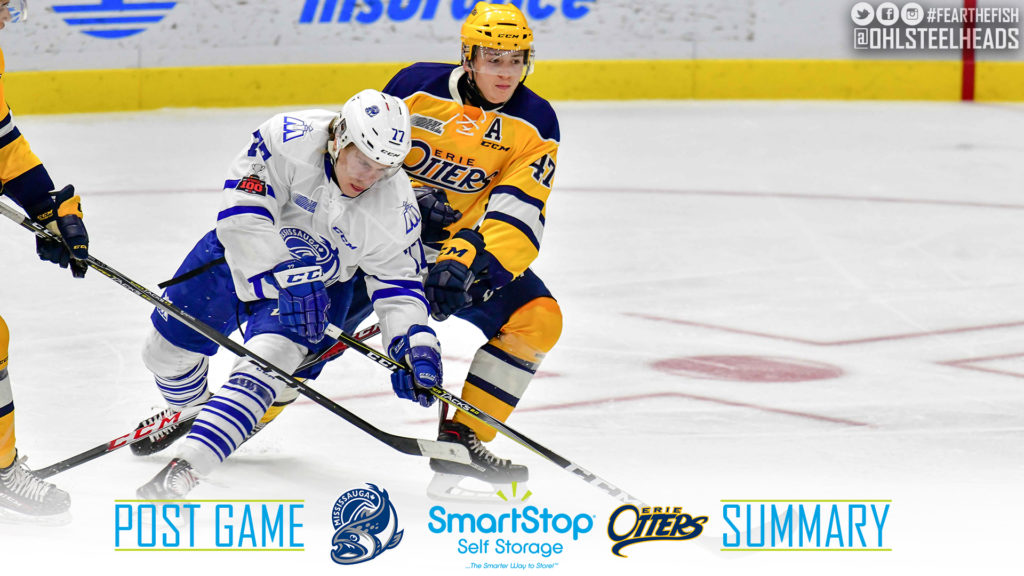 Sunday afternoon’s game at the Hershey Centre ended with a big win for the Mississauga Steelheads, currently sitting in eighth place of the Eastern Conference with 61 points. The Steelheads won their third of four games against the Erie Otters this season, and finally took the W after two tough losses against the Oshawa Generals followed by the North Bay Battalion. Owen Tippett played a crucial role with three goals and an assist.

The Steelheads hustled hard in the first period, probably spurred on by their furry fans in the seats. Their shots on goal climbed steadily, but Maxim Golod was the first to score and the Otters took the lead after the halfway mark. The only penalty of the period went to Troy Lajeunesse who was caught hooking, but the Fish couldn’t make anything of their power play. Mississauga spent the final minute in Erie’s zone, piling on more shots on goal with opportunity after opportunity. No one was able to capitalize before the buzzer sounded. The period ended with the Trout trailing 1-0 in the score and leading 15-6 on the shot clock.

Hayden Fowler got things started in the second with a power play goal while Isaac Walker sat for delay of game. Following that goal, though, Chad Yetman and Jack Duff served consecutive penalties, both for hooking. With under a minute left with the man advantage, Owen Tippett scored his 31st of the season and got the Trout going. In less than five minutes the Steelheads scored three more times, courtesy of Tippett again, Cole Carter and captain Mikey McLeod, who got a shorthanded goal while Ryan McLeod was out for tripping. The Fish defended their lead for the rest of the frame.

Not even two minutes into the third, Michael Little scored the Trout’s fifth goal of the afternoon. Nothing came of another Steelheads power play with Duff back in the box for tripping and the action slowed until past the midway point when Nic Hague scored his 32nd of the season. To close the scoring with two minutes left, Owen Tippett completed a hat trick and got the Steelheads up 7-2. Mississauga ended the game shorthanded with Nicholas Canade serving time for tripping, but they defended their net until the buzzer sounded. The final shots on goal were 48-28 in favour of the Fish.

Mississauga is heading to Peterborough to face the ninth place Petes Thursday. Puck drops at 7:05 PM.