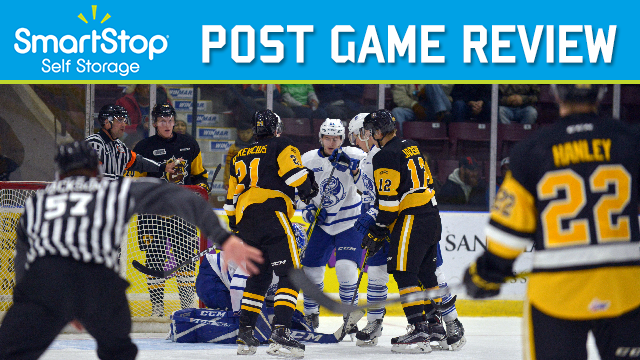 The Mississauga Steelheads opened 2017 with an eastern conference road game against the Hamilton Bulldogs. The Steelheads were coming off back-to-back wins over Kingston and Niagara, and boasted a six-game win streak on the road coming into tonight’s contest, while the Bulldogs were coming off a 6-3 win over the Peterborough Petes.

Jacob Ingham got the start in goal for Mississauga, and was tested early on. 3 minutes into the opening frame, Ingham stopped an initial shot from Hamilton’s Niki Petti, as well as the rebound from Matt Strome to keep the Bulldogs off the board. and Nathan Bastian opened the scoring at 13:58 of the first, firing a shot from the top of the slot past Dawson Carty. Brendan Harrogate and Jacob Moverare picked up the assists on Bastian’s 10th of the season. The Steelheads held a 1-0 lead after the first period of play, shots on goal were 13-9 in favour of Mississauga.

The Bulldogs finally solved Ingham at the half-way mark of the second, as Michael Cramarossa capitalized on the man-advantage to get Hamilton on the board. Assists on Cramarossa’s 11th of the season went to Cole Candella, and Justin Lemcke. At 15:40, Owen Tippett restored the Steelheads’ lead, picking off a pass in the Bulldogs’ zone and wired a shot past Carty from the high slot. The goal was Tippett’s 30th of the season, and was unassisted as the Steelheads held a 2-1 lead heading into the final frame. Shots on goal in the second period were 12-6 for Mississauga.

Tippett struck again in the third to buy the Steelheads some insurance late in the frame. Nathan Bastian flipped the puck out of the Steelheads’ zone as Tippett squeezed through two Hamilton defenders to jump out on a partial breakaway, and made no mistake beating Carty top shelf to seal a 3-1 victory for the Trout. The win is the Steelheads third straight, and seventh straight win on the road. They return home to the Hershey Centre to host the Barrie Colts on Friday night for a 7PM puck drop.