Tippett Wins it in OT 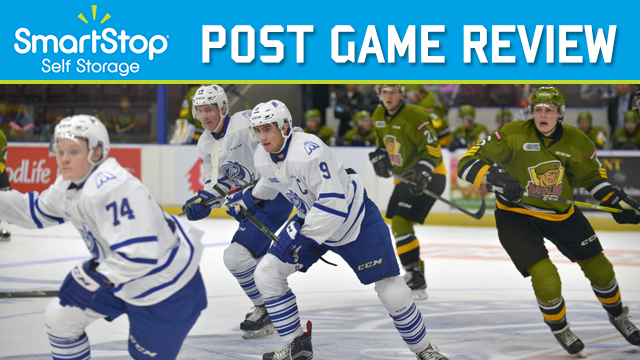 The Mississauga Steelheads closed out a northern road trip Sunday afternoon with a visit to North Bay for a central division matchup with the Battalion. This weekend marked Mississauga’s first 3-in-3 of the season, and after back-to-back losses Friday to Erie and Saturday to Sudbury, a win would send the Trout back to Mississauga on a positive note.

The Battalion were granted an early power play opportunity as Jake Ramalho was sent to the box to serve two minutes for interference. Joseph Murdaca came out with a big save to rob Cam Dineen and keep the Battalion off the board as the Steelheads successfully killed off the penalty. Michael McLeod showed off his speed with a huge individual effort to get the Steelheads on the board at 7:10 of the opening frame. Stefan LeBlanc picked up the lone assist on McLeod’s third of the season. Mississauga continued to pressure, keeping the Battalion on their heels before Nathan Bastian gave the Steelheads a two-goal cushion late in the frame from Damian Bourne and Nicolas Hague. The goal was Bastian’s sixth of the season as the Steelheads held a 2-0 lead at the end of the first.

North Bay’s Steve Harland scored the only goal of the middle frame to cut the deficit in half. Daniil Vertiy picked up the assist on Harland’s seventh of the season. North Bay edged the Steelheads in shots on goal in the second 11-8, but the Steelheads lead 2-1 on the scoreboard through two periods of play.

The Steelheads restored their two-goal cushion early in the final frame as Brendan Harrogate scored his fifth of the season, a beautiful bar-down shot over Moran’s shoulder blocker side. Aidan McFarland picked up the helper. Later in the frame, the Battalion would capitalize on a power play opportunity as Harland redirected a shot from Cam Dineen past Murdaca for his second of the game. With time winding down in the final frame, and Moran pulled in favour of an extra attacker, Mikey McLeod fired a shot on the empty net that was stopped by Cam Dineen. The Battalion then turned things the other way and Zach Poirier tied things up to send the game to 3-on-3 OT.

Just 14 seconds into the 3-on-3 overtime period, Owen Tippett scored his 16th of the season from Mikey McLeod and Jacob Moverare to seal a 4-3 win for the Trout. Mississauga returns home on Friday, November 11 to host the Oshawa Generals for a 7PM start.