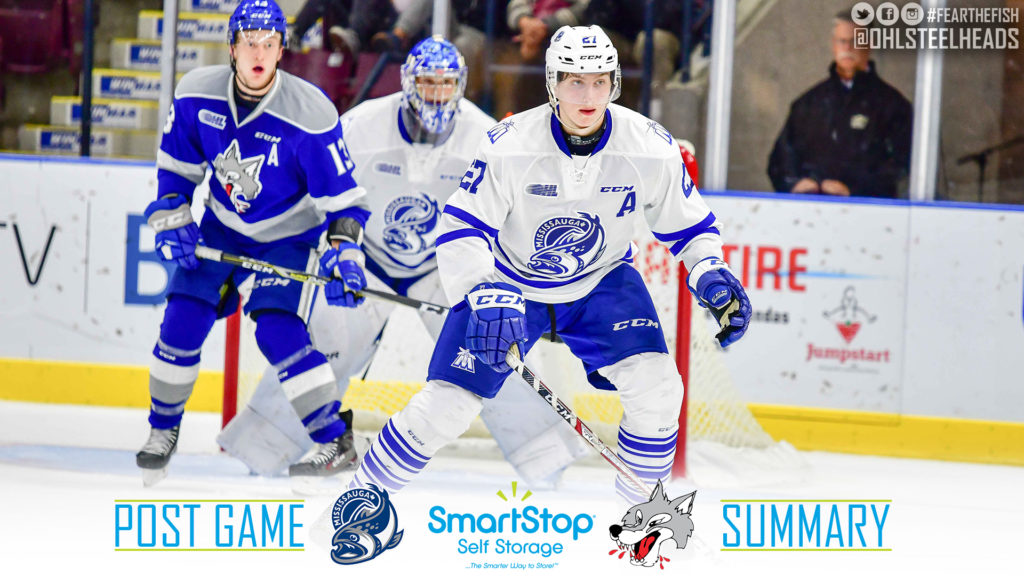 Coming off a 3-1 loss to the London Knights last night, the Steelheads came into Sunday’s game hoping to end things on a positive note in their last game before the Christmas break, which was also the team’s annual Teddy Bear Toss game. Although the Steelheads lead the season series against the Wolves 2-1, the Wolves took the most recent meeting earlier this month by a score of 6-3.

Just four minutes into the game, Trent Fox would make it rain teddy bears, getting the Steelheads on the board with his 10th of the season. Cole Schwindt and Ryan McLeod assisted on the goal. After a brief stoppage for teddy clean up, the game got back underway. The Steelheads outshot the Wolves 10-9 in the opening frame and held a 1-0 lead heading into the first intermission.

The Steelheads struck early again in the second as Michael Little extended their lead 2-0 at 4:11. Thomas Harley and Jacob Cascagnette assisted on Little’s fourth of the season. At 9:25, Jacob Cascagnette gave the Steelheads a solid cushion with his 10th of the s season from Owen Tippett. The Wolves would solve Ingham just past the halfway mark of the game as Darian Pilon netted his eighth of the season from Troy Lajeunesse and Macauley Carson. Late in the frame, Ryan McLeod restored the Steelheads’ three-goal lead with a shorthanded marker. Trent Fox assisted on McLeod’s ninth of the season. With seconds to go in the middle frame, Kirill Nizhnikov scored on the power play, cutting the deficit to bring the Wolves within two. Sudbury outshot Mississauga 11-10 in the second, while the Steelheads held a 4-2 lead after 40 minutes of play.

Mississauga’s offense shone in the third as the Steelheads added three unanswered goals en route to a 7-2 victory. Owen Tippett scored just over a minute into the third to put the Steelheads up 5-2. Minutes later, Nic Hague notched his 18th of the season to bring the score to 6-2, and later in the frame at 14:49, Hague added a second goal on the power play to make it 7-2 Steelheads. That goal was Hague’s 19th of the season as the Steelheads cruised to a convincing 7-2 decision over the visiting Wolves.

The Steelheads will be back in action on Friday, December 29th to host the Windsor Spitfires.