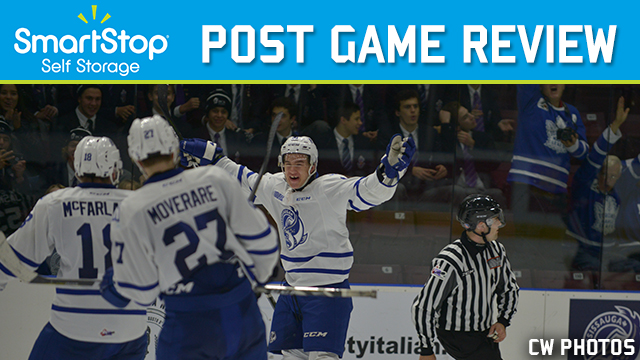 After a road loss in shoot outs to the Barrie Colts last night, the Steelheads returned to home ice to take on the Niagara IceDogs. Steelheads looked to extend their lead over Niagara in the Central Division standings, and capitalize on Niagara’s four game losing streak.
The first twenty minutes gave the home crowd a show, as Mississauga opened up the score early. Ryan McLeod fired a shot off a pass from Austin Osmanski at 5:52. Steelheads dominated this period, taking seven shots in a row in the middle of the frame – five of which came from Jason Smith. At 14:08 the crowd was back on their feet after a rocket from Owen Tippett. His goal at 4:25 was assisted by Stefan LeBlanc and Nathan Bastian. Niagara managed to get several great shots on net, but all were denied by Steelheads’ goalie, Jacob Ingham.

The second period started off with a bang as Nicolas Hague scored at 0:16, from Tippett and Stephen Gibson. Niagara responded at 2:33 as Danial Singer put the IceDogs on the board, assisted by Ben Jones and Oliver Castleman. After several drives to the net, Tampa Bay’s draft pick, Christopher Paquette scored Niagara’s second of the game at 9:06, with a beauty top shelf. His goal was assisted by Castleman and Ryan Mantha. Owen Tippett would extend the Trout’s lead at 15:49, with his second of the game, and fourth for the Trout. His shot came off a double rebound from Bastian and Austin Osmanski. In the last two minutes of play, once again Niagara was able to get off some promising shots, but Ingham held strong to close out the period.

The Steelheads were determined to keep the fans upright tonight, extending their lead to five early. At 3:37 Jeremey Goodwin hit a milestone with his first career OHL goal, assisted by Shaw Boomhower and Hague. The momentum visibly shifted as the IceDogs clawed their way back into a fighting chance, and that persistence paid off. With his second of the game and Niagara’s third goal, Paquette scored to bring the IceDogs closer. His goal was assisted by Mantha and Ben Jones. Oliver Castleman scored Niagara’s fourth at 15:34, off an assist from Matthew Philip, and the IceDogs turned up the heat after that rallying goal. Ben Jones would score a heartbreaker to tie the game at 16:51 from a pass by Paquette. In the dying minutes of the period, both teams were determined to end it in regulation, and Niagara almost achieved this with a cross bar shot that rang throughout the arena. Boomhower would lead one last charge in regulation for the Steelheads but it was tipped out of play to end regulation.

3-on-3 overtime saw an intense back and forth between both teams, as everyone in this rink was biting on their nails. After some incredible saves by both Ingham and Colton Incze, Ryan McLeod found a way past Incze and fired one into the back of this net for this second of the game, and the game winner.