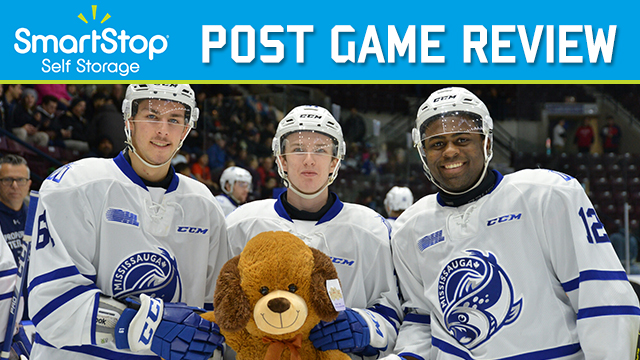 In their third game of the weekend, the Steelheads looked to give their fans a coveted win on home ice, that was denied to them on Friday. Today they faced off against the Ottawa 67’s, and it was in Ottawa where the Trout broke their nine-game losing streak in a 6-3 win. Today also marked the fifth annual Teddy Bear Toss. Last year, Nathan Bastian scored the first goal, that made it rain teddies in the Hershey Centre. With Bastian out due to injury, all eyes were on the Trout to see who would net this year’s goal. 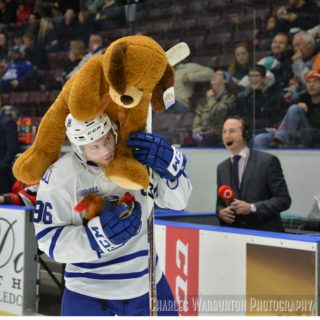 Fans did not have to wait long to find out, as Spencer Watson netted the Teddy Bear Toss goal, just one minute and three seconds into the opening frame. Watson’s goal was assisted by Stephen Gibson and Owen Tippett. Nicolas Hague was booked at 2:55 for hooking, and the 67’s were able to capitalize with the man advantage and slip one past Matthew Mancina. Ben Evans tied the game up with his fifth of the season, assisted by Noel Hoefenmayer and Carter Robertson at 4:07. The Steelheads would go on their first power play at 7:20, as the 67’s were called for too many men on the ice. Ottawa killed the penalty but we’re booked again for hooking with Hoefenmayer at 16:48. The Trout had some great chances by Jason Smith and Owen Tippett, but Ottawa goal tender, Leo Lazarev was able to stop 14 of the 15 shots he faced in the period.

The second period started off a little slower, and required some power plays to gain momentum. Stefan LeBlanc sent to the box for hooking at 6:41, but this didn’t impede your Steelheads, as Spencer Watson had an incredible short-handed shot on net, but no one was there for the rebound. At 11:47 Ryan McLeod was called for tripping, giving the 67’s their third power play of the game. Luckily for the Trout, Ottawa was once again booked for too many men on the ice, this time being served by David Pearce. As time expired on the McLeod penalty, Spencer Watson once again proved that he is a force to be reckoned with. Nicolas Hague fired off a rocket from the blue line, and as Watson was falling, he netted the rebound at 14:51 to break the tie in this game. Just over two minutes later, Kevin Bahl was sent to the box for cross-checking, which opened up the door for another Steelheads goal. At 18:21, assisted by Jason Smith and Tippett, Harrogate netted his 15th of the season and the third goal for Mississauga.

A bit of a scary start to the third for the 67’s as goal tender Lazarev went down with an apparent leg injury. He stretched to make a save, and as soon as the puck was cleared, dropped and the refs blew the whistle. The Ottawa trainer came out, and the decision was made for Oliver Lafreniere to come in, and relieve Lazarev. The Steelheads were in the Ottawa zone, when a bad give away from Stephen Gibson led to a two-on-one breakaway to the Mississauga net. Mancinca put up an incredible save on Kody Clark’s shot to keep the 3-1 lead. At 5:57 Tippett was booked for tripping, but the Steelheads were able to kill the penalty. Another Steelheads penalty, this time from Christ Taylor for holding, put Ottawa up on their fifth power play of the game. With the clock running down, the 67’s turned the pressure on and it paid off. At 14:44 Jared Steege snuck one in, unassisted, through the five-hole that just barely crossed the red line. At 2:08 the 67’s called a time-out, and whatever Coach said to his team, must have worked, because at 1:35 Ottawa tied the game. Drake Rymsha netted his 15th of the season, assisted by Travis Barron and Evans. This would do it for regulation, and we headed into overtime in the Hershey Centre.

Mississauga fans will have to wait a little longer for that home ice win, as Steege was able to score a quick overtime shot, at 0:46. His second of the game, and 10th of the season, was unassisted and gave the 67’s the road win.

The Steelheads will have 10 days off, as the OHL breaks for Christmas. The Trout will return to action on December 28th, against the Kingston Frontenacs at 7:00pm. Be sure to follow us on Twitter, Facebook, and Instagram to stay up to date with all things Steelheads