Watson picks up 4 points in 4-1 win over Battalion 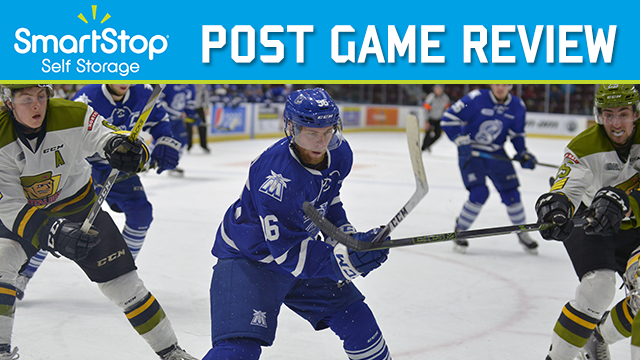 After not playing a game in almost a week, the Steelheads looked to stay hot and grab their fourth win in a row with the feisty North Bay Battalion coming to town. Over the past weekend, the Steelheads clinched a berth into the 2017 OHL Playoffs, while the Battalion continue to fight for the last playoff spot in the Eastern Conference.

The game started off with each team exchanging shots and each goalie making big saves. Matthew Mancina was between the pipes for the Steelheads, and Julian Sime for the Battalion. Each team had great chances on the power play, but both goalies shut the door. The first period ended with no goals scored by either team.

Early in the second, both teams took turns controlling the play. Four minutes in the period, Steelheads’ defender and birthday boy, Stephen Gibson, took a penalty for tripping. On the ensuing power play, Spencer Watson opened up the scoring with a shorthanded goal for the Steelheads. With two minutes left in the frame, Mikey McLeod tucked in the Steelheads’ second goal of the night, giving the home team a 2-0 lead going into the third period.

The third period started off fast and hard hitting. Jacob Cascagnette scored on the only power play chance the Steelheads had in the third period, giving the Trout a 3-0 lead. The Steelheads took three penalties during the third period but were only able to kill off two of them. Brett McKenzie scored on the power play to bring the Battalion within two goals. In the dying minutes of the game, North Bay pulled their goalie in hopes of making a comeback. Nic Hague crushed the hopes of the Battalion by scoring an empty net goal and solidifying the win for the Steelheads. Matthew Mancina made 21 saves on 22 shots and helped give the Steelheads the victory.

The Steelheads are back in action Saturday night, when they head to Hamilton, to face off with the Bulldogs. Puck drops at 7pm!