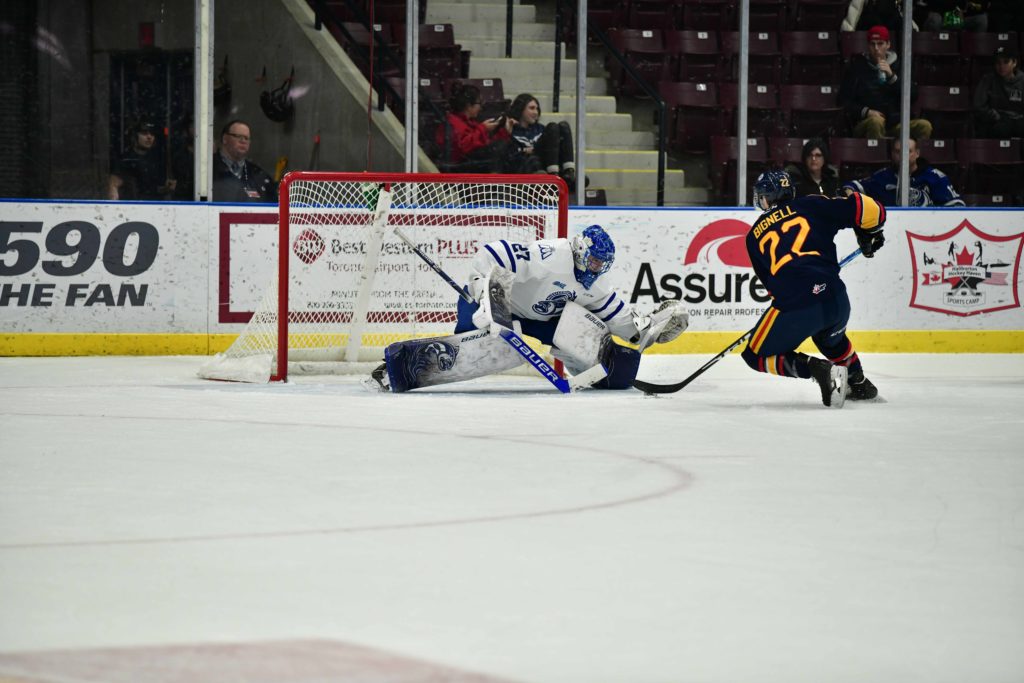 Mississauga, ON – The Mississauga Steelheads will look to continue their climb up the standings this weekend with two home games against the Flint Firebirds and Barrie Colts.

Ty Collins played in his 100th OHL game this past Sunday against the North Bay Battalion. The Newmarket, ON native was acquired by the Steelheads in a midseason trade from the Guelph Storm, who he won an OHL Championship with last season on route to the Memorial Cup. Collins has registered 19 points (7G, 12A) in 42 games with the Steelheads this season.

Kai Edmonds played in his 100th OHL game on Monday against the Erie Otters. This season, Edmonds has been amongst the top goaltenders in the league, leading all goalies in games played (49 GP), while ranking in the top 10 in both goals against average (3.19 GAA) and save percentage (.897 SV%). Edmonds was originally acquired by the Steelheads in Summer 2019 from the Barrie Colts.

Mississauga currently sits in a tie for sixth place in the Eastern Conference with the Hamilton Bulldogs, two points back of the Barrie Colts, with 13 games left to play in the regular season. Hamilton will play two games this weekend against the Peterborough Petes and Oshawa Generals, while Barrie will play the Saginaw Spirit and Windsor Spitfires before a showdown against the Steelheads at the Paramount Fine Foods Centre on Sunday.

UPCOMING HOME GAMES
Friday’s game against the Flint Firebirds will represent the last time that Steelheads fans will have the opportunity to see future NHL star Ty Dellandrea play at the Paramount Fine Foods Centre. Dellandrea, a 2018 1st round pick of the Dallas Stars, won a gold medal with Team Canada at the IIHF World Juniors in the Czech Republic, where he registered 5 points (3G, 2A) in 7 games. The Port Perry, ON native has recorded 67 points (31G, 36A) in 44 games for the Flint Firebirds this season.

The Flint Firebirds (35-17-1-1) are in the middle of a historic run, having won 13 games in a row, with their last loss coming on January 18th against the Peterborough Petes. The Firebirds were recently recognized as one of the top teams in all of Canada, having been ranked #10 overall amongst all CHL teams in the latest Kia CHL Top-10.

In addition to Ty Dellandrea, the Firebirds are led by defenceman Tyler Tucker, who was acquired by the team from the Barrie Colts in a January trade. The Longlac, ON native was a 7th round pick of the St. Louis Blues in the 2018 NHL Draft and has recorded 20 points (7G, 13A) in his first 18 games with his new team. Tucker recently recorded 7 points (2G, 5A) in a Firebirds game against the Sarnia Sting.

The Steelheads will return to the ice at the Paramount Fine Foods Centre on Sunday afternoon for a massive divisional matchup against the Barrie Colts. Barrie has been climbing the standings quickly, with a 7-2-1-0 record in their last 10 games. The Steelheads will need a win on Sunday if they want to stay pace with Barrie for the race to first place in the division.

FIGHT THE COLD COAT DRIVE
The Steelheads have joined forces with A1 Air Conditioning & Heating for the first annual “Fight the Cold Coat Drive”, on Friday against the Flint Firebirds.

All fans are encouraged to bring a gently used or new coat for donation to support the cause. Those who make a coat donation Friday night, will receive a voucher for a complimentary ticket to the Steelheads game on Friday February 28th as a thank you for their generosity. A bin will be available at the A1 Air Conditioning & Heating table located at Section 1.

For more information on the Fight the Cold Coat Drive, please click here.

For tickets to Friday’s game against the Flint Firebirds and the Fight the Cold Coat Drive, or Sunday’s Mental Health Awareness game against the Barrie Colts, please visit the Box Office, purchase online through ticketmaster.ca or by calling 905-502-9100.