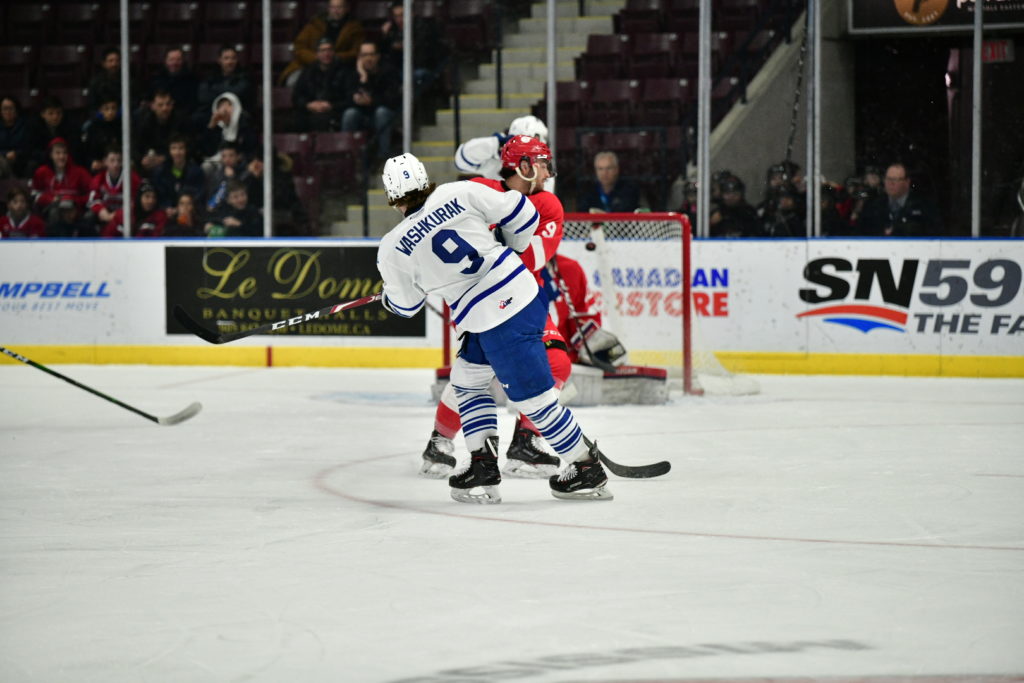 Mississauga, ON – The Mississauga Steelheads will hit the road this weekend for a three-game road trip against the Barrie Colts, Kitchener Rangers and Kingston Frontenacs. The Steelheads are coming off a perfect (4-0-0-0) homestand, with wins coming against Peterborough, Kitchener, North Bay and Sudbury.

PERFECT HOMESTAND
Keean Washkurak stole the show as the Steelheads walked to a 10-3 win over the Sudbury Wolves, on the Steelheads third annual Pucks ‘N’ Paws night. The St. Louis Blues prospect registered six points (2G, 4A), which tied a franchise record for points in a single game set by Michael McLeod back on February 24th, 2017 against the Peterborough Petes. As a result of his efforts, Washkurak was recognized as both the CHL Player of the Night and OHL’s First Star.

#CHL Player of the Night is @StLouisBlues prospect @washer_9 with a career high 6️⃣ point performance helping @OHLSteelheads swim up the @OHLHockey standings with 4️⃣ straight wins and eight in their last ten games: https://t.co/oAkUhymwzF pic.twitter.com/HhdW7sTPmr

Aidan Prueter returned to the lineup this past weekend after being out since January 10th with an injury and didn’t disappoint. The London, ON product suited up in two games for the Steelheads, while registering six points (2G, 4A), including a career-high four points in a game against the Sudbury Wolves, helping the Fish to their offensive explosion.

Mississauga also received help from overage forward Calvin Martin, who scored the first hat-trick of his career against Sudbury, while also registering a career-high four points (3G, 1A) in the contest. Martin was named the OHL’s Second Star of the Night for his efforts.

First #OHL hat-trick for @calvin_martin5 came in a big win as the @OHLSteelheads put up double digits to climb within two points of first in the Central 🎩🎩🎩 pic.twitter.com/QPHD4lqMtr

The Steelheads season turnaround wouldn’t exist without the play of James Hardie, who is currently riding an eight-game point streak, recording 18 points over that span (10G, 8A). Hardie’s linemate and Florida Panthers prospect, Cole Schwindt, has been just as hot, as he has registered a point in all seven games since he returned to the lineup on January 17th (6G, 10A).

JUST KEEP SWIMMING
The Fish currently boast an impressive 9-2-0-0 record in their last 11 games, as the race for first place in the Central Division continues to tighten. Mississauga sits just two points behind the first place Sudbury Wolves, and two points ahead of the Barrie Colts, with a key matchup coming up on Thursday night. Sudbury will play three games against Oshawa, Barrie and Niagara this weekend, while Barrie will face the Steelheads, Sudbury and Erie.

The Barrie Colts have been one of the hottest teams in the league of late, with a 5-0-1-0 record in their last six games. Defenceman Brandt Clarke, selected fourth overall by Barrie in the 2019 OHL Priority Selection, and Ethan Cardwell, who was acquired from the Saginaw Spirit at the beginning of January, have both registered six points (1G, 5A) in their last two games. Not many have been hotter than 2020 NHL Draft eligible prospect Tyson Foerster, who is currently riding a nine-game point streak, where he has registered 15 points (8G, 7A).

It’s a new look lineup for the Barrie Colts, who no longer boast the likes of Ryan Suzuki, Tyler Tucker or Matej Pekar, but not one for the Steelheads to take lightly, as they have gelled quickly. A win for Mississauga would create some much-needed separation in the Central Division, as the Steelheads would move four points ahead of the third-place Colts. The puck will drop at 7:30 PM at the Colts Centre on Thursday night, as both teams look to leave it all on the line with the end of the regular season drawing near.

Mississauga will have a quick turnaround on Friday, as they will have a rematch at 7:30 PM against the Kitchener Rangers. The Steelheads and Rangers recently played at the Paramount Fine Foods Centre on January 26th, where the Fish came back from a three-goal deficit at the start of the third period to win 5-4 in overtime, on the back of a Cole Schwindt natural hat-trick.

The Kitchener Rangers have been one of the OHL’s best, having only lost two games in regulation since late November. They were recently ranked 10th amongst all 60 teams by the Canadian Hockey League in the Week 19 Kia CHL Top-10. Dallas Stars prospect Riley Damiani has led the way for the Rangers, as he has registered 26 points (7G, 19A) in his last 16 games.

The Steelheads will wrap up the weekend with their last matchup of the regular season against the Kingston Frontenacs. The Fish will be looking to even the season series, with Kingston taking two of three games so far, with the Steelheads win coming back on December 15th at the Paramount Fine Foods Centre. Duncan Penman scored two goals, while Aidan Prueter and Calvin Martin both registered three-point games on the night.

The Frontenacs are led by 16-year-old Shane Wright, selected 1st overall in the 2019 OHL Priority Selection after being granted exceptional player status last spring, joining the likes of Connor McDavid, John Tavares and Aaron Ekblad. Wright has lived up to all expectations this season, registering 46 points (28G, 18A) in 43 games. The Burlington, ON native was recently named the Assistant Captain of the Kingston Frontenacs and is eligible to be selected in the 2022 NHL Draft.

2020 NHL Draft eligible Martin Chromiak joined the Frontenacs at the beginning of January and has been on fire to start his OHL career, registering 18 points (8G, 10A) in his first 13 OHL games. The Slovakia product was recently ranked 35th overall amongst International Skaters by NHL Central Scouting ahead of the upcoming draft.

Kingston is fighting to stay alive in the playoff race, as they currently sit five-points behind the eighth place Niagara IceDogs for the last playoff spot in the Eastern Conference.