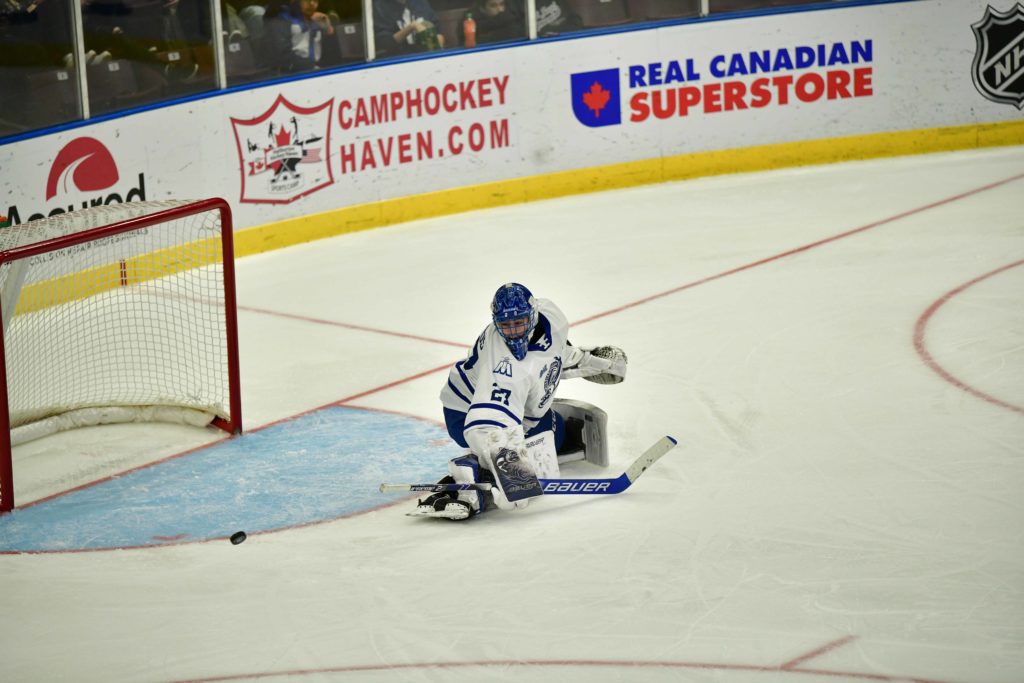 Mississauga, ON – The Mississauga Steelheads will return to the ice on Friday for another 3-in-3 weekend. Mississauga will take on the North Bay Battalion on Friday night at the Paramount Fine Foods Centre, before heading to Sarnia for an afternoon game on Saturday against the Sting. The weekend will conclude with the Steelheads Toys for Tots game presented by Wawanesa Insurance on Sunday afternoon against the Kingston Frontenacs.

Florida Panthers Prospect Cole Schwindt has been leading the way for the Steelheads of late, as he is currently riding a 6-game point streak (1G, 7A). Last weekend, Schwindt played in all three games for the Fish while registering 5 assists. While Schwindt has been stellar, St. Louis Blues prospect Keean Washkurak will also be looking to continue his hot streak as he has recorded 11 points (3G, 8A) in his last 6 games. Washkurak became the 8th player in Steelheads history to score the Teddy Bear Toss goal on Sunday against the Soo Greyhounds.

Friday’s game at the Paramount Fine Foods Centre against the North Bay Battalion will mark the first of six meetings between the teams this season.  The Battalion (5-23-0-0) currently sit last place in the Eastern Conference, having dropped each of their last four contests. They are led by forward Mason Primeau, son of long-time NHL player Wayne Primeau, who was selected by the Vegas Golden Knights in the 5th round of the 2019 NHL Draft.

Mississauga and Sarnia have played once this season, back on November 15th where the Steelheads walked away with a 6-2 victory. The Steelheads had one of their best offensive performances of the season, piling on 50 shots on goal. Liam Ham registered four assists, while William Portokalis and Keean Washkurak both scored two goals in the contest.

Shane Wright and the Kingston Frontenacs will arrive at the Paramount Fine Foods Centre on Sunday afternoon to wrap up the weekend. In March 2019, Wright became the fifth player in OHL history to be granted “exceptional status” to play in the league as a 15-year-old, following the likes of John Tavares, Connor McDavid, Aaron Ekblad and Sean Day.

Sunday’s game against the Frontenacs will mark the Steelheads annual Toys for Tots game, presented by Wawanesa Insurance, working along side the Peel Regional Police and Salvation Army. The Steelheads encourage all fans to support the toy drive by bringing an unwrapped gift or giving a cash donation at kiosks located at the main gates. Fans who donate will receive the chance to win a trip for two to the 2020 CHL Memorial Cup presented by Kia.

Constable Emily Rogers, Toys for Tots Co-Chair commented on behalf of the campaign, “The campaign’s success is directly attributed to the generosity of people in our region. It’s a true reflection of our amazing community and what can happen when we all work together. The Steelheads have been hosting an annual game on our behalf for many years. Your generosity and support is what makes Christmas possible. Happy holidays from our family to yours.”

Sunday’s game will also represent the Steelheads third “Winning Nights” game of the season, where if the Fish walk away with a victory, all fans in attendance will receive the opportunity to redeem their ticket for a free ticket to the Steelheads January 5th game against the Peterborough Petes.

Tickets to Friday’s game against the North Bay Battalion or Sunday’s Toys for Tots game against Shane Wright and the Kingston Frontenacs can be purchased by visiting the Box Office, online through ticketmaster.ca or by calling 905-502-9100.