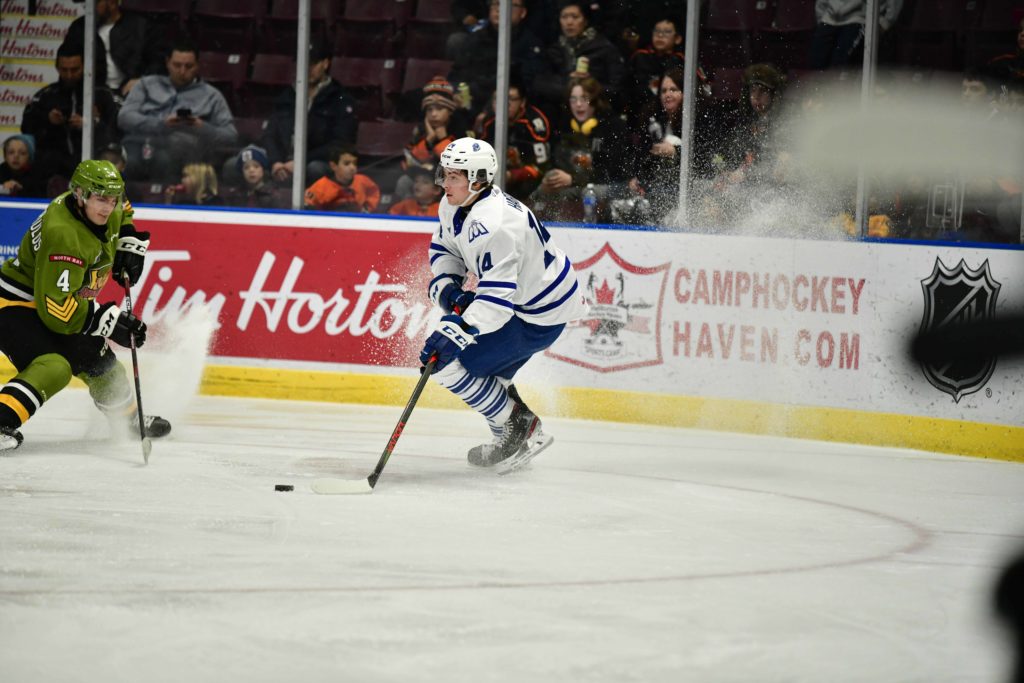 North Bay, ON – The Misssissauga Steelheads will head north for their longest road trip of the season this weekend, starting with a Thursday night game against the North Bay Battalion. The Steelheads will then head to Sault Ste. Marie on Friday night before rounding out the weekend in Sudbury on Sunday afternoon.

STARTING OFF THE YEAR RIGHT
It was a strong start to 2020 for the Steelheads last week, winning games against the Hamilton Bulldogs and Peterborough Petes.

Assistant Captain Nicholas Canade has been on fire of late, registering 12 points (6G, 6A) in his last 6 games, including the first hat-trick of his career against Peterborough. The Mississauga, ON native surpassed a career-high in points with his third goal of the game on Sunday.

James Hardie has continued his strong play as the season goes on, recording 3 multi-point efforts in his last 5 games. The 2020 NHL Draft eligible prospect has registered 8 points (3G, 5A) over that span. Hardie currently ranks 5th amongst all OHL skaters in shots on goal for the season with 152.

16-year-old defenceman Chas Sharpe had a breakout game against the Peterborough Petes, registering the first two points of his career (2A). Sharpe was a third-round selection of the Steelheads in the 2019 OHL Priority Selection and has impressed this season, being the fourth youngest player to play in the OHL.

UPCOMING WEEKEND
The Steelheads will play their second game of the season against the North Bay Battalion at 7:00 PM on Thursday night. The two teams met at the Paramount Fine Foods Centre back on December 13th, where the Steelheads walked away with a 4-2 victory. St. Louis Blues prospect Keean Washkurak registered three points (2G, 1A) in the win.

Mississauga will keep the road trip going against the Soo Greyhounds on Friday night. The Steelheads and Greyhounds last played on Teddy Bear Toss night at the Paramount Fine Foods Centre, where Keean Washkurak was the 8th player to score the Teddy Bear Toss goal in team history.

The Greyhounds (19-18-2-0) rank seventh in the Western Conference, having won 7 of their last 10 games. They boast one NHL draft pick on their roster, defenceman Jacob LeGuerrier, who was a fifth round pick of the Montreal Canadians in 2019. Recently graduated forward Barrett Hayton is a member of the Arizona Coyotes, who led Team Canada to a Gold Medal at the 2019 IIHF World Junior Championships in the Czech Republic.

The Steelheads will wrap up the weekend with a game on Sunday afternoon in Sudbury. The Steelheads and Wolves have played three times this season, with Sudbury taking all three games, most recently coming on December 1st in Sudbury in a 5-4 overtime loss for the Fish. Steelheads forward Aidan Prueter recorded two goals in the game.

Sudbury (19-18-1-0) sits in first place in the Central Division, just seven points ahead of the Steelheads. The Wolves will receive a boost from the return of top 2020 NHL Draft eligible prospect Quinton Byfield (30GP, 22G-35A), who helped Team Canada to win gold at the 2019 IIHF World Junior Championship in the Czech Republic.

The Steelheads will follow up this weekend with another three-game road trip next week, before returning to the Paramount Fine Foods Centre on Friday, January 24th to take on Toronto Maple Leafs prospects Semyon Der-Arguchintsev, Nick Robertson and the Peterborough Petes. All Friday Home Games during the 2019-20 season feature $3 off domestic tall cans. Tickets to the game can be purchased by visiting the Box Office, online through ticketmaster.ca or by calling 905-502-9100.