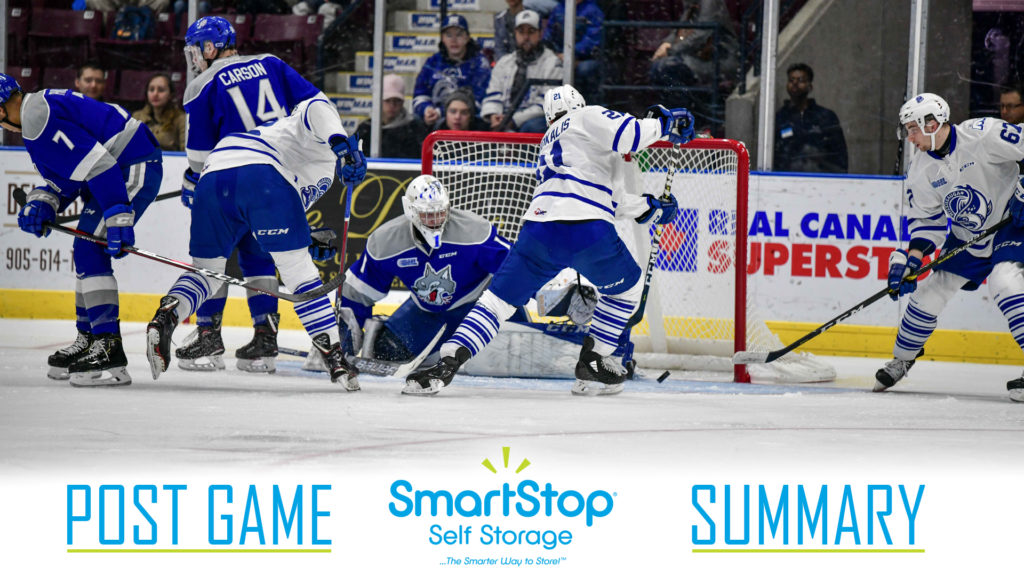 Coming off back-to-back losses, the Mississauga Steelheads travelled to Sudbury Saturday afternoon for their third game in as many days. Today’s matchup is the second of six meetings between these two teams, with the Steelheads leading the series 1-0 as they continue to jockey for top spot in the central division.

Feeling the effects from their 3-in-3, the Steelheads came out of the gate a little slower than usual. Looking to find their stride, the Steelheads were gifted an early opportunity on the power play as Sudbury’s Darian Pilon was called for holding. Unfortunately they couldn’t capitalize on the man-advantage and the game returned to even strength. At 8:17, Cal Christner and Blake McConville dropped the mits and were both handed five-minute fighting majors. Christner pick up an extra two-minutes for instigating, and an additional game misconduct, giving the Wolves an opportunity on the power play. The Steelheads were able to kill off that penalty and once again the game returned to even strength. Just past the halfway mark of the frame, Wolves’ leading scorer, David Levin notched the opening goal to give the home team a 1-0 lead. Isaak Phillips and Emmett Serensits assisted on Levin’s 12th of the season. 30 seconds later, the Wolves struck again as Darian Pilon beat Ingham to extend Sudbury’s lead 2-0. Macauley Carson and Drake Pilon assisted on the goal. The Steelheads trailed by two heading into the first intermission.

Despite outshooting the Wolves 12-11 in the second period, the Steelheads could not find the back of the net and the score remained 2-0 in favour of the Wolves.

Looking to get on the board, the Steelheads would have an early opportunity in the third as Sudbury’s Drake Pilon got called for cross checking and Anthony Tabak got penalized for unsportsmanlike conduct, giving the Steelheads a two-man advantage. Seconds into the power play, Owen Tippett beat Luukkonen to cut the Wolves’ lead in half. Thomas Harley and Cole Schwindt assisted on Tippett’s 18th of the season. Late in the frame, the Wolves were able to restore their two-goal lead as Darian Pilon scored his second of the night, beating Ingham with a slapshot top shelf. With time winding down, the Steelheads continued to battle and it paid off as Tippett fired a shot past Luukkonen to bring the Steelheads back within one. Unfortunately time wasn’t on their side and the Steelheads fell just short in a 3-2 final.

The Steelheads will head to Barrie to take on the Colts on Thursday, before returning home to host the Hamilton Bulldogs on Friday for a 7PM start.