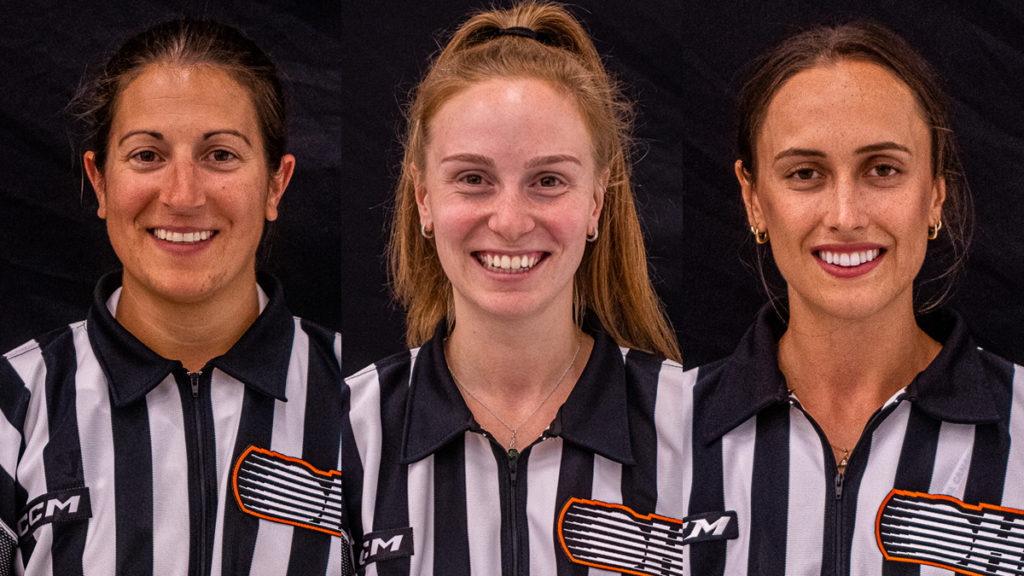 Toronto, Ont. – In advance of the opening weekend of the Ontario Hockey League’s 2022 Pre-Season schedule of games, the League has announced three groundbreaking officiating assignments.

Friday night’s exhibition matchup between the Mississauga Steelheads and the visiting Guelph Storm will feature a woman referee for the first time in League history. Lacey Senuk, originally from St. Albert, Alta. will work alongside fellow referee Michael Cairns while Justin Noble and Adam Burnett patrol the lines.

The 37-year-old Senuk worked as a women’s hockey referee at the 2022 Olympic Winter Games in Beijing, China. She also has past experience working international tournaments through the IIHF, Tier II Jr. A hockey in the Alberta Junior Hockey League, as well as the U SPORTS ranks.

“Lacey made a strong impression at the League’s recent Pre-Season Officiating Camp,” said Conrad Haché, the OHL’s Director of Officiating. “She has demonstrated an ability to officiate the best women’s hockey in the world, being selected to work at the Olympics. Lacey brings poise and a mature presence to the ice and she has earned this opportunity.”

Saturday night’s back-end of a home-and-home between the Storm and visiting Steelheads will mark the first time in OHL history that two women have worked on the same officiating team. Referee Hillary Brennan of London, Ont. will skate alongside linesperson Marlowe Schott of Elmira, Ont.

A 23-year-old with prior officiating experience in the Northern Ontario Junior Hockey League (NOJHL), Brennan has also refereed in the men’s U18 AAA ranks. She played in the Provincial Women’s Hockey League (PWHL) on defence with the London Devilettes program.

Schott, 25, has officiated in the PWHL as well as the men’s Junior C and Juvenile hockey circuits.

“Hillary and Marlowe are both officiating prospects with a lot of promise,” said Haché. “The pre-season affords our OHL Officiating Department an opportunity to provide younger officials assignments where they will work alongside more experienced referees and linespersons as a means of development. We’re looking forward to this opportunity for both of these officials as they’ve demonstrated tremendous potential in their showings thus far.”

The news is the second groundbreaking step for women in the OHL this week after the Hamilton Bulldogs announced the hiring of local product Laura Fortino on Monday. She becomes the first woman hired as an Assistant Coach in the League, also serving in the capacity of Director of Player Development.

Kirsten Welsh of Blackstock, Ont. became the first woman to officiate an OHL game on September 30, 2021, working the lines in a pre-season matchup between Guelph and Mississauga. She made her regular season officiating debut as a linesperson on November 12, 2021 in a game between the Owen Sound Attack and host Kitchener Rangers.

Including Friday’s two matchups, Labour Day weekend features a total of 14 exhibition games across the OHL. Follow along with all of the action with scores, statistics, recaps and more at ontariohockeyleague.com.