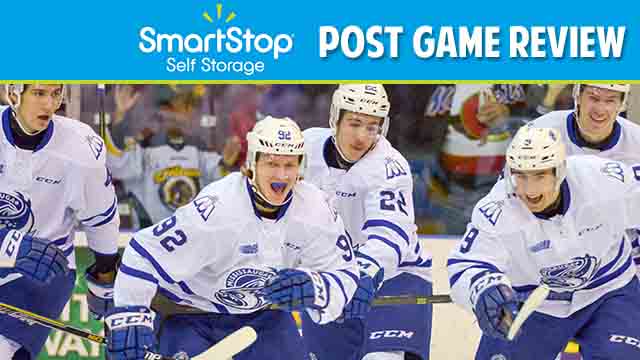 Mississauga, ON – North Bay visited the Hershey Centre for the second time this season to take on the Steelheads Friday night. The Battalion came into tonight’s game off a 4-3 loss yesterday night at the hands of the Kingston Frontenacs while Mississauga last played Wednesday morning for their annual school day where they took down the Hamilton Bulldogs 5-1. With their win, Mississauga has now won consecutive games for the first time this season after they defeated the Sudbury Wolves 6-0 last Sunday. This meeting will mark the third time the two teams have met. North Bay and Mississauga split the first two as the Battalion defeated the Steelheads on Thanksgiving Day in North Bay 5-3 while the Trout returned the favour October 25th as they beat the Troops 4-2 at the Hershey Centre.

Both teams had great opportunities to give their teams the early lead just minutes into the game but each goaltender were up to the challenge as Jack Flinn, and Battalion goaltender, Jake Kment shut the door, keeping the game scoreless. However, after North Bay took a team penalty for too many men at the 9:53 mark, Michael McLeod would win the draw to Nathan Bastian who sent it Alexander Nylander for a beautiful one timer that went bardown to beat Kment. Nylander’s 14th of the season gave the Trout the 1-0 lead as the goal was scored just four seconds into the power play. The rest of the frame saw both teams play a strong defensive game as scoring chances were limited for both sides. Shots in the period were 12-6 Steelheads.

The second period saw the Steelheads break the game open as they capitalized on their power play opportunities. The Steelheads would go on a two man advantage as Kyle Wood and Mathew Santos would receive minor penalties 45 seconds apart where the Steelheads would make no mistake as Owen Tippett rifled one by Kment to for his 5th of the season and third in four games as he gave the Trout a 2-0 lead. Alex Nylander and Everett Clark received assists on Tippett’s tally. Now on a 5-on-4 powerplay, the Steelheads would score just 58 seconds after Tippett as Ryan McLeod would light the lamp after a flurry in front of the net saw the rookie find the puck and bury his second goal in as many games. Damian Bourne and Luke Kutkevicius drew assists on the goal. The goal marks the first time this season the Steelheads have scored three power play goals in the same game. Around the 6 minute mark in the period, Nylander would net his second of the game and 15th of the season after finishing off yet another passing between him, Michael McLeod and Nathan Bastian. Despite making the most of their opportunities, the Battalion controlled the play the majority in the frame, however Jack Flinn was up to the task as he stopped all 14 shots that came his way. Shots in the frame were 14-9 for the Battalion, 21-20 Steelheads total.

The offensive show continued early in the third for the Steelheads as Owen Tippett roofed his second of the game past Jake Kment just 2:26 in the period for his first career multi-goal game in the OHL. The goal was Tippett’s 6th of the season and fourth in four games as it gave the Steelheads a 5-0 lead. Austin Osmanski and Damian Bourne would record the assists on the goal. The Trout would make it 6-0 after Nylander netted his third of the game and 16th of the season after Michael McLeod gave him a marvellous pass to finish off his first career OHL hat-trick. For the third time in the contest, M.McLeod and Nathan Bastian would draw assists on Nylander’s goal. Ryan McLeod would extend the Trout’s lead to 7-0 after receiving a pass in the slot from Luke Kutkevicius and firing it low glove on Jake Kment for his 3rd goal of the season. After recorded just two assists in his first 16 games, R.McLeod now has 3 goals and an assist in his past two. Kutkevicius drew the only assist on the goal. Jack Flinn would shut the door the rest of the way as he stopped all 31 Battalion shots, recording his fourth shutout of the season, and second in three games. The Steelheads have now won three in a row outscoring their opponents 18-1 in the process.

Alexander Nylander lead the way for the Trout has he recorded four points (3G, 1A) while Nathan Bastian and Michael McLeod each recorded three assists. Ryan McLeod and Owen Tippett each had two goals in the game, which nearly equalled their combined season total (they had 5 combined goals entering today’s game), while Damian Bourne and Luke Kutkevicus added two assists in the victory.

The Steelheads will stay put in Mississauga as they face off against Leafs prospects Mitch Marner and JJ Piccinich Sunday afternoon at 2PM at the Hershey Centre. To get your tickets, click on the link below to ensure them now!