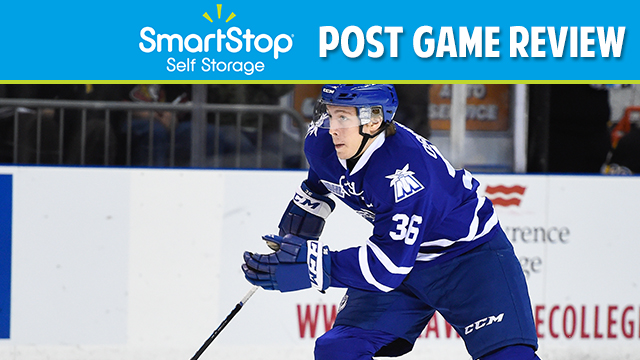 Hamilton, ON – The Mississauga Steelheads kicked off a four-game road trip tonight starting with a visit to the FirstOntario Centre to take on the Hamilton Bulldogs. The two teams met last Friday night at the Hershey Centre where the Steelheads came out on top with a 2-0 win. Luke Kutkevicius and Daniel Muzito-Bagenda scored for the Steelheads that night, while goaltender Jack Flinn stood tall stopping all 28 shots he faced to earn his second shutout of the season. Both Hamilton and Mississauga faced the Central Division leading Barrie Colts in their last games. The Steelheads suffered a 6-0 loss at home, while the Bulldogs fought off a third period comeback to hold on for a 6-5 win.

Looking to get back in the win column, the Steelheads came out flying in the first as Damian Bourne netted his fourth of the season to give the Trout an early 1-0 lead. Bourne’s goal was unassisted at 1:10 of the opening frame. The Bulldogs answered back to even the score at 14:16 as Matt Luff recorded his third of the season from Brandon Saigeon and Fedor Gordeev. Shots on goal were 10-6 in favour of the Bulldogs, with the score even at 1-1 heading into the first intermission. 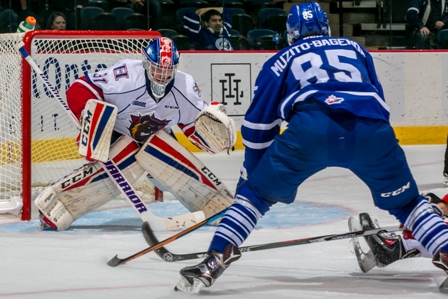 The second period saw a few firsts as Austin Osmanski and Jason Smith both picked up their first goals of the season to put the Steelheads up 3-1. Michael McLeod and Nathan Bastian picked up the helpers on Osmanski’s first OHL career goal, while Smith’s was unassisted. With time winding down in the middle frame, Mason Marchment would bring the Bulldogs within one from Jesse Saban and Stephen Harper. Shots on goal were 15-9 in the second in favour of the Steelheads.

Osmanski would strike again in the third to give the Steelheads a two-goal cushion. McLeod and Alex Nylander picked up the assists on Osmanski’s second of the night. With Charlie Graham out of the net in favour of an extra-attacker, the Bulldogs pulled back within one as Trent Fox finished off a nice play from Niki Petti. The Bulldogs were looking to complete the comeback, but Flinn and the Steelheads were able to hang on in the final seconds for a 4-3 victory. With two goals on the night, Austin Osmanski earned first star honours. McLeod was second star with two assists, and Hamilton’s Matt Luff was third star.

The Steelheads continue their road trip Friday night as they visit the Sault Ste. Marie Greyhounds for a 7:07 pm start.