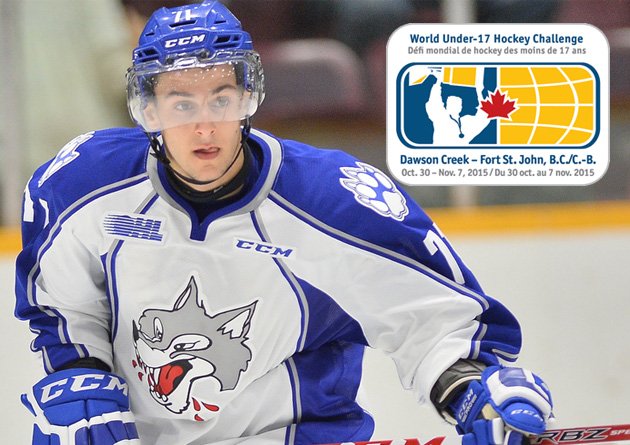 CALGARY, Alta. – Dreams will come true for the 66 young men who’ve been selected to represent Canada in their first international competition when they take to the ice at the 2015 World Under-17 Hockey Challenge, Oct. 30 to Nov. 7 in Dawson Creek and Fort St. John, B.C.

Hockey Canada and the Canadian Hockey League released the full event roster on Friday; over the next few weeks, the Canadians will be named to one of three squads – Canada Black, Canada Red, and Canada White. Prior to 2014, Canada was represented by five regional teams: Atlantic, Ontario, Pacific, Quebec, and West.

*Not currently playing in OHL but have signed Standard Player Agreements Committing to the club.

“We have had a chance to get a look at these players through this summer’s development camp, and as they started their season”, said Ryan Jankowski, Hockey Canada’s director of player personnel. “We have assembled a strong group for the World Under-17 Hockey Challenge.”

The 66 players were selected by Jankowski, together with Joël Bouchard, a member of Hockey Canada’s Program of Excellence management group, and regional scouts Carl Bouchard (Quebec), Barclay Branch (Ontario), Wade Klippenstein (West), Kevin Mitchell (Atlantic) and Darrell Woodley (Ontario). These same gentlemen are charged with making up the three Team Canada rosters, which will be announced the week prior to the tournament’s start.

“It’s an exciting step for these players to represent their country for the first time, and we have a very talented group who will certainly give the fans in Dawson Creek and Fort St. John a lot to cheer about,” said Shawn Bullock, senior manager of hockey operations and men’s national teams for Hockey Canada. “We’re happy with the depth we’re seeing with the under-17 group; it bodes well for the future of our program as these players look to progress through our system to the under-18 and junior programs.”

The 2015 World Under-17 Hockey Challenge brings together the top players in the world born in 1999 or later. The three Canadian teams will be joined by the Czech Republic, Finland, Russia, Sweden, and the United States, forming two groups of four teams. All eight teams will qualify for the quarter-finals, with the winners advancing to the semifinals, and losers facing off in placement games. The full schedule can be found here.

The 22-game tournament will officially kick off Nov. 1 at the Encana Events Centre in Dawson Creek with Canada Black taking on Canada White, while Canada Red opens its tournament against Finland at the North Peace Arena in Fort St. John. Both cities will also host two pre-tournament games on Oct. 30.

Full-tournament ticket packages are still available, as well as new, $80 evening-only packages which include six games. In addition, A ‘Family 4-Pack’(pre-tournament and preliminary round)is also available, starting at $25 for four tickets.

Limited quantities are still available of all ticket packages. Single-game ticket information will be announced closer to the start of the tournament. For more information on tickets, including how to purchase, CLICK HERE.

The gold medal game is Saturday, Nov. 7 in Dawson Creek at 9:30 p.m. ET/6:30 p.m. PT, and will be shown on TSN and RDS, Hockey Canada’s official broadcasters, along with the bronze-medal game and the semifinal played in Dawson Creek. All other tournament games, including 12 preliminary-round games, four quarter-finals, two placement games and the semifinal played in Fort St. John, will be available live through FASTHockey webcasts at www.hockeycanada.ca/wu17.

For more information on the 2015 World Under-17 Hockey Challenge, visit www.hockeycanada.ca/wu17 or follow along via social media at www.facebook.com/worldu17 or www.twitter.com/hc_wu17.