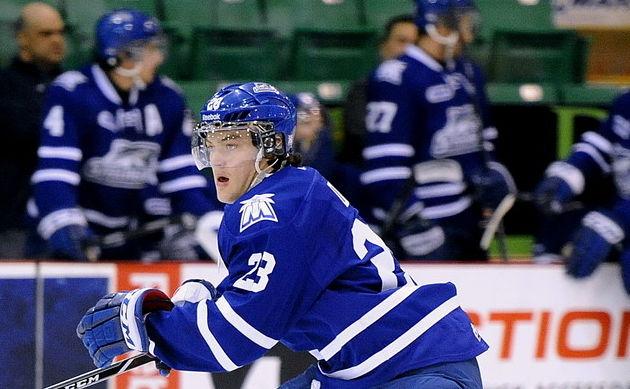 MISSISSAUGA, ONT. – With nothing but daylight ahead, Sean Day snatched a loose puck at the Mississauga Steelheads blueline and took off.

The risk was low with his team on a power play, so the defenceman picked his way through the neutral zone before darting between would-be North Bay Battalions defenders Cam Dineen and Mike Amadio.

While he was stopped on a scoring chance by goaltender Jake Smith, the rush on a Sunday afternoon game in late October provided a snapshot of Day’s tantalizing talents ahead of the 2016 NHL draft some eight months from now.

“I’m just worried about playing as well as I can,” Day said after scoring an empty-net goal in a 4-2 win. “I have a good attitude. I know I can play. There’s not much more to it.”

But there is more to it than that. Much more.

It’s only a month into the 2015-16 CHL season, but Day – the OHL’s fourth exceptional status player – has clearly emerged as this year’s most polarizing draft-eligible skater.

It’s a moniker of which he’s acutely aware.

“I’m critiqued a lot more than a normal player would be,” said the 17-year-old who was born in Belgium, put on skates for the first time as a toddler in Singapore and grew up in Rochester, Mich.

There’s little question Day has the skill to be a first-round selection. Whether or not that comes to fruition next June in Buffalo is the million-dollar question.

Mark Seidel, the chief scout for North American Central Scouting, likens Day to St. Louis Blues defenceman Jay Bouwmeester in everything from skating ability to temperament. He says the Steelheads veteran is clearly a top-five talent.

The cloudy one: Seidel currently has Day ranked as the 32nd overall pick. He even knows a few in his scouting brethren that don’t think Day will be drafted. At all.

Although he believes such a view is ludicrous, Seidel is certain “there will be a lot of battles in (NHL) team scouting meetings” when Day’s name comes up.

“He’s one of the most unique players I’ve ever scouted in my entire history doing this – over 22 years,” Seidel said. “In a sense he’s kind of like (2014 New York Islanders first-rounder and Niagara IceDog) Josh Ho-Sang, polarizing for different reasons. From a physical standpoint, this kid has tools NHL players dream about. He’s a linebacker on skates.

“But he really lacks urgency. He’s got a real passive quality to his game. With his abilities, he could take the game over and simply dominate. Yet, he doesn’t.”

Day’s hockey story is known by even the most casual of hockey fans.

Like Connor McDavid, Sean Day was granted exceptional status that let him to play in OHL a year early.

He was granted exceptional status – allowing him to enter the OHL a year early – following in the footsteps of OHL and NHL first overall picks John Tavares, Aaron Ekblad and Connor McDavid. But, unlike his exceptional status predecessors, Day wasn’t selected first in the OHL draft. In 2013, Travis Konecny (Ottawa), Dylan Strome (Erie) and Matthew Spencer (Peterborough) were all chosen before Mississauga nabbed Day.

At this point in their careers, Tavares, Ekblad and McDavid had either played on Canadian world junior teams or were in the running for a spot.

“I don’t even consider myself part of that anymore. I’m just a normal guy in the draft,” said Day, referring to the status. “It might be hard not going first overall in the NHL draft, but it’s not my fault that (projected first pick) Auston Matthews is that good.

“The exceptional status rule is: is he able to play in the OHL at 15 years old. It’s not: is he going to be drafted first overall in the NHL? If that was the rule, I don’t think I would have looked into it.”

Day has Canadian citizenship. Both his parents were born in Toronto as was one of his three brothers. He’d like to wear the Maple Leaf in international competition. However, Day failed to crack the under-18 team for the Ivan Hlinka championship in August. It didn’t help that he showed up to the Team Canada camp more than 15 pounds heavier than his listed 6-foot-3, 230-pound frame.

NHL Central Scouting then rated him as a B-level player – a distinction that warrants second- or third-round consideration for the draft – a grading Day feels is out of line.

“The reason I was rated as a B player was my ‘character’,” he said. “They talk about my weight a lot. But I’ve already lost 20 pounds since coming here so I’m down to 225, which is a good playing weight.”

Other independent evaluators, like Future Considerations Hockey director of scouting Dan Stewart, have viewed Day as unmotivated or too willing to rely on his natural abilities.

Day controls the puck against Flint during OHL action early in the 2015-16 season.

Day is cognizant of the criticism.

“A lot of stuff around me is I don’t try hard enough,” he said. “It’s just the way I skate. I don’t flail around. I just try my hardest. I’m not a guy that’s going to flail around just for the scouts.”

Yet, his stock is perceived to be stagnant or even falling.

“He is basically the same player this season as he was when he came into the league,” Stewart said.

Day had six goals and 16 points in 60 games as a rookie. He followed that up with 10 goals and 36 points in 61 contests for the playoff-less Steelheads last season.

He felt things in Mississauga weren’t going as planned and had serious conversations with agent Pat Brisson and the group at Creative Artists Agency about asking for an off-season trade. When the Steelheads added assistant coaches James Richmond and Michael Nylander, along with the former NHLer’s son Alex Nylander to play the wing, Day changed his tune.

Richmond is a two-time Ontario Junior Hockey League coach of the year and a member of the player development staff for the Los Angeles Kings, the team that employs Day’s hockey “role model” Drew Doughty.

So far this season Day has eight points in 13 games. Steelheads head coach and general manager James Boyd has noticed Day’s game has matured, particularly when it comes to picking his spots offensively.

The next focus is defending.

“Sean can be really assertive. He’s a big, strong guy. He relies on his skill to get him out of trouble,” Boyd said. “But sometimes it requires brute force.”

The other thing Boyd has encouraged Day to do is unwind away from the rink. Day goes fishing as often as he can and his parents visit regularly on weekends. In part because of all the negative attention draft-related attention, Boyd also convinced Day to see a psychologist earlier this year. Day believes the support has helped him immensely.

“He probably has the feeling a lot of the time that the world is against him,” Boyd said. “But we compare him to his own age group. For his age group of players, Sean’s a pretty darn good player with a lot of experience. We’re very happy he’s on our club.”

This season will determine which NHL club Day joins next summer. He can’t help but pay attention to what people are saying about him. And the next few months represent his final chance to change their minds for the better.

“Everyone’s watching the draft,” he added. “There’s a lot of guys that say they’re not watching it, but with social media everyone’s getting tweeted at. I think I can go high first round. I still have to prove it.”