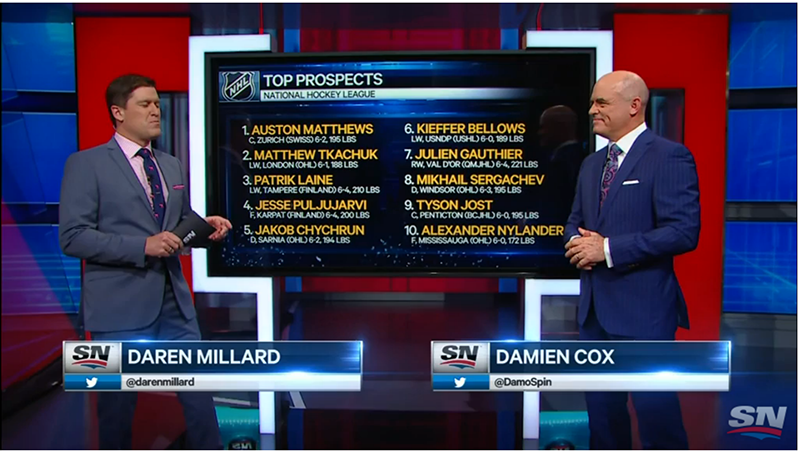 Marc Crawford sidled up to Auston Matthews at practice this week and inquired when the presumptive No. 1 pick in next summer’s NHL draft might be ready to return. “He said, ‘I could play right now,’” said Crawford. “But everybody’s being cautious. He’s going to be playing for a long, long time, so there’s no rush.”

So Matthews wasn’t on the team bus for the trip to Davos for a game Tuesday night—Davos won 4-2—but Crawford said he anticipates the Arizona-born teenager will be back playing for Zurich in the Swiss elite league as early as Monday.

For several days, Matthews has been skating full out in a red sweater, which means he hasn’t been cleared for full contact yet as he recovers from a back injury suffered last month when he fell into the boards and then had an opposing defenceman fall on top of him. He goes for an MRI on his back this Friday.

He missed playing for the U.S. at the Deutschland Cup earlier this month, but is expected to be part of the national team for the World Junior Championships in Finland after Christmas.

3. (4) Patrik Laine, LW, Tampere (Finland), 6-3, 195
The big winger is inconsistent but often impressive. The world juniors will be an interesting test.

5. (2) Jakob Chychrun, D, Sarnia (OHL), 6-2, 194
Has a great stick and is always in the right spot to deflects a lot of passes. Scouts want to know about the health of his shoulders.

8. (HM) Mikhail Sergachev, D, Windsor (OHL), 6-3, 195
Plays defence like he’s “sitting in a rocking chair” and has surged in the rankings over the past month. Was the sixth pick of this year’s CHL import draft.

10. (12) Alexander Nylander, RW, Mississauga (OHL), 6-0, 172
Plays on a line with two other top prospects, Michael McLeod and Nathan Bastian, and leads all OHL rookies in scoring.

14. (9) Michael McLeod, C, Mississauga (OHL), 6-1, 184
He’s had to shoulder leadership responsibilities early in the season after the captain was traded and is now starting to put up numbers.

17. (11) Luke Kunin, C, University of Wisconsin, 6-0, 190
Having a so-so start with a Badgers squad struggling with three wins in its first 10. They have a big double-header with Denver this weekend.

25. (25) Dillon Dube, C, Kelowna, 5-10, 175
Hurt his eye at Portland in early November and is expected to be out three weeks. Some see him as a similar prospect to Travis Konecny.

28. (29) Charlie McAvoy, D, Boston University (NCAA), 5-11, 195
Waiting for several other NTDP players to join him with the Terriers. He’s a solid blueliner who can run a power play.