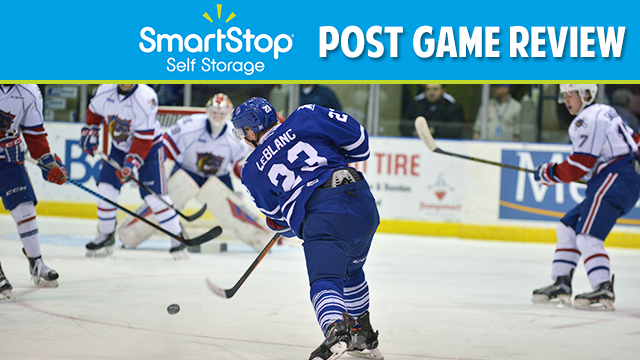 Mississauga, ON – After a few days off, the Mississauga Steelheads returned to action Friday night to host the Hamilton Bulldogs at the Hershey Centre. The Steelheads welcomed Alexander Nylander, Michael McLeod, Nathan Bastian and Sean Day back to the lineup following a successful trip to Vancouver for the BMO CHL/NHL Top Prospects Game. Team Cherry Player of the Game Michael McLeod didn’t miss a beat, scoring and adding two assists in a 5-1 win over the Hamilton Bulldogs. Daniel Muzito-Bagenda, Owen Tippett and Everett Clark all had a goal and an assist while goaltender Jack Flinn made 28 saves.

Daniel Muzito-Bagenda opened the scoring at 12:05 of the first with a wrister from the hash marks. Nicolas Hague and Owen Tippett were credited with the assists on Muzito-Bagenda’s 10th of the season. Later in the frame, Nylander and Michael McLeod jumped out on a 2-on-1 that was broken up by Connor Walters, however Nathan Bastian, who was not far behind, picked up the loose puck and found Nylander all alone in front of Connor Hicks, where he made no mistake picking the top corner to give the Steelheads a 2-0 lead after 20 minutes of play.

Some penalty trouble would cost the Steelheads midway through the second as Cole Candella capitalized on the man-advantage with a shot from the point that made it passed a screened Jack Flinn. Owen Tippett regained Mississauga’s two-goal lead at 15:51 of the middle frame after rushing the zone and shoveling the puck passed Hicks while being dragged down by Candella. Everett Clark had the lone assist on Tippett’s 12th of the season as Mississauga held a 3-1 lead after two periods of play.

Clark would add one of his own at 5:12 of the third from Michael McLeod and Muzito-Bagenda. Michael McLeod had the final tally of the night, finishing off a beautiful tic-tac-toe play from Damian Bourne and Stefan LeBlanc for a final score of 5-1.

The Steelheads will head over the border Sunday to take on the Otters in a 5:00 pm start.