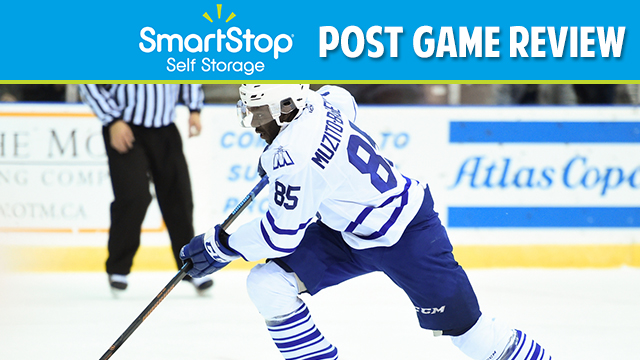 Sault Ste. Marie, ON – The Mississauga Steelheads continued their four-game road trip Friday evening with a trip up north to take on the Greyhounds. The Steelheads were coming off a 4-3 win over the Hamilton Bulldogs, while the Greyhounds were looking to bounce back from a 6-4 loss to the Saginaw Spirit.

After being given an early power play opportunity, the Steelheads would strike first as Daniel Muzito-Bagenda finished off a nice passing play from Sean Day and Luke Kutkevicius. Muzito-Bagenda’s wrister from the point marked his 5th goal of the season. Later in the period, former Steelhead Bobby MacIntyre would even the score from Zachary Senyshyn and Boris Katchouk. With time winding down in the opening frame, the Steelheads would have another power play opportunity, as Tim Gettinger would serve two minutes for high-sticking. The Steelheads would capitalize on the man-advantage again as Stefan LeBlanc fired a bullet shot from just inside the blue line past Joseph Raaymakers to give the Trout a 2-1 lead heading into the first intermission. Stephen Gibson and Everett Clark drew the assists on LeBlanc’s 3rd of the season. Shots on goal were 17-4 in favour of the Steelheads.

Down by one, the Greyhounds would respond with three consecutive goals. Gabe Guertler evened the score with a power play marker at 6:06 of the middle frame. Assists went to Blake Speers and Mac Hollowell. Speers would give the Greyhounds their first lead of the night at 16:25 from Colton White and Hollowell. The Greyhounds held a 3-2 lead heading into the second intermission. Shots on goal were 11-9 in favour of the Soo.

Nearing the midway point of the final frame, the Greyhounds would gain a two-goal cushion as Katochouk netted his 7th of the season. After making two incredible back-to-back saves, Flinn was unable to stop Katochouk as the Greyhounds extended their lead 4-2. Muzito-Bagenda brought the Steelheads back within 1 at 11:57 of the third, but the Steelheads were unable to complete the comeback. LeBlanc and Alex Nylander drew the assists on Muzito-Bagenda’s second of the night.

The Steelheads continue their road trip tomorrow night in Sudbury.