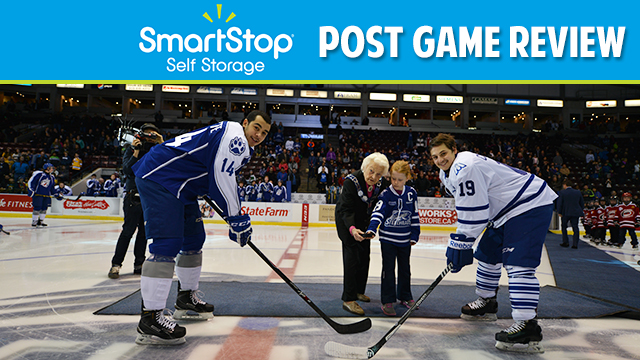 Tonight, the Steelheads hosted not only the Sudbury Wolves, but a very special guest in Mississauga, Mayor Hazel McCallion. Mississauga paid tribute to the City’s longest-tenured mayor with a pre-game ceremony and puck drop.

The Steelheads broke their two-game goal slump early into the first period of the game. Just two and a half minutes in, Lucas Venuto put the Steelheads on the board with his fifth of the season, while Bobby MacIntyre tallied the lone assist. Before hitting the five minute mark, the Steelheads potted another one to take a 2-0 lead. MacIntyre deflected a Jared Walsh point shot, and Everett Clark would net the rebound that was sitting on a silver platter for his third goal of the season. Sudbury looked motivated to get back into this game, but Spencer Martin turned away several attempts on goal. The Trout scored quite an unusual goal, as the puck shot straight up into the air, deflecting off a body before landing in the Sudbury net. Mikey McLeod is credited with the goal, and Nathan Bastian and Damian Bourne with assists. Steelheads’ penalty trouble allowed the Wolves to get back into the game, as Kyle Capobianco and Nick Baptiste each scored goals with the man advantage before the end of the period. In the final minutes of the period, Nathan Bastian collected a pass from Jesse Barwell and ripped a shot over the shoulder of Troy Timpano. Shots were even at 15 at the end of the first.

Just a minute and forty seconds in to the middle frame, the puck slid past Timpano and he grabbed it with his glove hand as it was sliding across the goal line. The goal was under review and ultimately was denied. Jeff Corbett went into the boards awkwardly and was in obvious discomfort. Fortunately, he was able to skate to the bench under his own power. The Steelheads controlled much of the puck possession in the second, as the physical play ramped up between these teams. Despite getting into some penalty trouble, the Steelheads four-man unit was strong in the second, and they didn’t allow any power play goals following the first period.

Sudbury came out in the third period energized, as they sought to bring themselves back into the game. They would take the lead in shots, but the score still remained the same. Midway through the frame, McLeod and Bourne executed a give-and-go around a Sudbury defenceman, but McLeod tipped the offering just wide of the goal. With just under two minutes left in regulation, the Wolves pulled Timpano in favour of an extra attacker. In the dying seconds of the game, if it wasn’t already, Josh Burnside iced the game with an unassisted empty-net goal.

The Steelheads take to the road for a Sunday afternoon matchup in North Bay against the Battalion. The Trout play in their School Day Game on Wednesday, November 19 as they host the Oshawa Generals for an 11:00 a.m. bout. Great tickets are still available online through Ticketmaster and at the Hershey Centre box office. Be sure to follow the Steelheads on Twitter (@OHLSteelheads) and Facebook (/SteelheadsOHL).