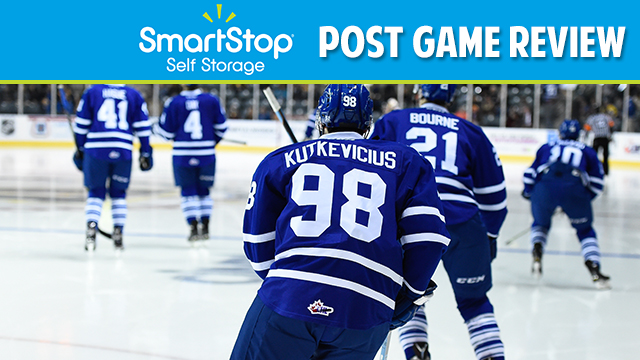 Mississauga, ON – The Bulldogs entered the Hershey Centre Friday Night as they took on the Steelheads in the first ever meeting between the two organizations. Both teams were looking to reverse their fortunes as they each suffered defeat in their last contest. The Steelheads lost Thursday night against the Niagara Ice Dogs in St. Catherines 4-2 while the Bulldogs fell 4-1 to the Oshawa Generals in Hamilton on Wednesday night.

The game started with a fast paced tempo as both teams were trying to establish early game momentum. Luke Kutkevicius would give the Steelheads that momentum as he buried his first career OHL goal by goaltender Charlie Graham to give the Trout a 1-0 lead. Brendan Harrogate and Daniel Muzito-Bagenda drew assists on the tally. Shots in the period were 10-9 Mississauga.

The second period was a hard fought back and fourth defensive that saw limited scoring chances for both sides. As the period began to wind down, Daniel Muzito-Bagenda finished off a marvellous passing play that saw Damian Bourne send it Everett Clark who slid it across the slot to Muzito-Bagenda for his fourth goal of the season. The goal was DMB’s second point of the night. Shots in the frame were 9-6 Bulldogs, 18-16 Bulldogs total.

Mississauga went into the third period leading by two for the second straight home game as they hoped to hold off the Bulldogs to claim victory. Even though Hamilton came at the Steelheads with everything they had, it wasn’t enough as Jack Flinn shut the door on a Bulldogs’ comeback as he stopped all 28 shots he faced for his second shutout of the season. Alexander Nylander failed to record a point which ends his point streak at 10 games. Shots in the third were 10-5 Bulldogs, 28-21 Bulldogs for the game.

Mississauga next plays Sunday afternoon at 2:00PM when they host their division rival, the Barrie Colts. This is a crucial game for both teams as Mississauga looks to gain ground on the Colts for the division lead while Barrie looks to further their lead in the division with a win over the Steelheads.