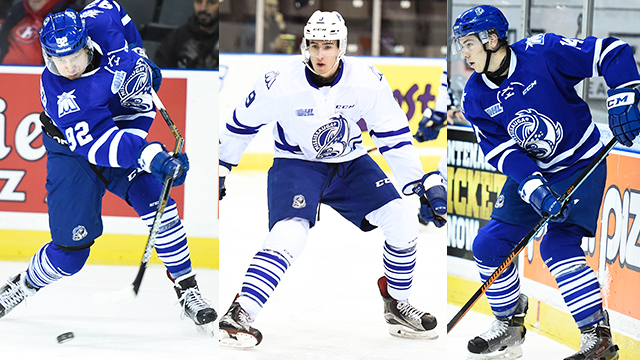 The best athletes have mastered that most difficult-to-grasp pursuit: good timing.

The same thing might be said for businesses looking to initiate a marketing plan.

Both came together perfectly for the Mississauga Steelheads this week.

The Ontario Hockey League (OHL) team that plays out of the Hershey Centre received some timely news from the league office this week when it was confirmed that 62 players from the OHL were listed among NHL Central Scouting’s November ‘Players to Watch’ list for the 2016 NHL Draft which takes place June 24-25 in Buffalo, New York. Three of them are Steelheads: Michael McLeod, Alexander Nylander and Nathan Bastian.

All got an ‘A’ rating, meaning they’re projected to be picked in the first round.

In all, 11 OHL skaters received an ‘A rating,’ including 2014 OHL Priority Selection first overall pick Jakob Chychrun of the Sarnia Sting.

“Mississauga has been able to stockpile quite a collection of prospects for both the 2016 and 2017 NHL draft class,” NHL Director of Central Scouting Dan Marr told NHL.com’s Mike Morreale. “Second-year players McLeod and Bastian continue to develop and contribute while establishing themselves as first-round considerations. Nylander is excelling on the smaller North American ice and the three of these players give Mississauga a uniqueness of having a line of first-round prospects.”

Steelheads’ owner Elliott Kerr was thrilled with the news and says the team is “now a force for many years to come.”  He said the rankings show that Mississauga’s scouting and player development is second  to none. He also thinks the team will produce first rounders in 2017 and 2018 as well.

“Going to a Steelheads’ game is like looking at NHL’s future stars, he said. “It’s been great to see from a marketing perspective.

He also thinks Mississauga’s big three should be four. Star defenceman Sean Day is listed as a ‘B’ prospect, meaning he’s projected for the second round of the NHL draft.

Strome is a Mississauga native, as is McLeod.

He was Mississauga’s first pick in the 2014 OHL Priority Selection when the Steelheads made him the fifth pick in the draft. Prior to being drafted, he spent his 2013-14 with the Toronto Marlboros of the Greater Toronto Minor Midget Hockey League where he recorded 21 goals and 36 assists in 33 with the team. He played under the watchful eye of another Mississaugan, Paul Coffey who, ironically, was a high first round pick when he was drafted by the Edmonton Oilers in the early 1980s.

McLeod led the Marlboros to an OHL Cup Champion and was named tournament MVP.

This August, McLeod played for Team Canada at the Ivan Hlinka in Czech Republic and Slovakia where he recorded 2 goals and 2 assists as he helped Canada defeat Sweden in the finals to claim the gold medal.

So far this season, McLeod is second on the team with 30 points, which includes a team leading 22 assists and is first amongst forwards in plus-minus at +8. McLeod was selected to represent Team OHL during the Canada Russia Series that took place in Owen Sound on November 12th where Team OHL defeated Team Russia 3-0. Bastian, a native of Kitchener, was also on the team. He was selected by the Steelheads in the 7th round (127th overall) of the 2013 OHL Priority Selection Draft. This year, Bastian has registered 9 goals and 15 assists, and his 24 points place him third on the Steelheads in that category.

Nylander is a native of Sodertalje, Sweden, and was selected 12th overall in the 2015 CHL import draft by the Steelheads. He is the son of former NHLer and current Steelheads’ assistant coach, Michael Nylander, as well as the younger brother of Toronto Maple Leafs’ prospect William Nylander (another high first rounder).

Nylander played the majority of last season in Sweden with AIK J20 where he was nearly a point per game player with the team as he record 15 goals and 25 assists in 42 games.

On September 5th, Nylander confirmed that he would play for the Steelheads for the upcoming 2015-16 season making him the first ever Swedish born player to suit up for the team.

He has recorded 35 points (16 goals and 20 assists) which leads the Steelheads, leads all rookies in scoring and is 7th in overall league scoring. He was named OHL Rookie of the Month for October.